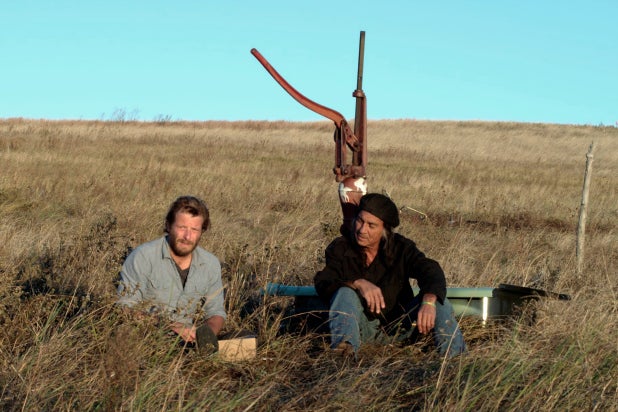 Independent filmmaker Steven Lewis Simpson takes on many roles in “Neither Wolf Nor Dog”: He simultaneously serves as a director, producer, cinematographer, editor and co-screenwriter, and for some films, having the director serve in many roles benefits the storytelling.

However, in this particular movie (which is based on co-screenwriter Kent Nerburn’s semi-autobiographical novel of the same name), it would have behooved Simpson to consult others — not just regarding direction, editing and writing, but perhaps just to speak to someone else before taking on this particular narrative and creating yet another Native American story told through a white man’s lens that benefits absolutely no one.

Kent Nerburn (Christopher Sweeney, “Chasing Mavericks”) receives a mysterious call from a Native American woman who says her grandfather requested she call him, and that Newburn needs to come meet with him. Although hesitant (and seemingly angry) about it, Kent drives more than 400 miles to meet with the elderly grandfather, Dan (Dave Bald Eagle).

Dan has read Kent’s new book, an oral history of Native American folklore, and wants his story told the way someone with an “education” would tell it. Kent agrees to listen, but instead is taken around the reservation and surrounding areas to see firsthand the injustices the Lakota tribe suffers.

There are many moments where the filter of a Native American filmmaker would have benefitted the overall narrative. For one, Sweeney’s poor performance serves up so much scowling and angry banter that it doesn’t ever feel like this is a man that anyone, let alone a deeply prideful elder, would welcome into his home and trust to tell their stories.

If anything, the performance turns Kent into some sort of faux ally, too bothered to see the pain of the people and way too focused on making it known that he didn’t slaughter indigenous people or give them smallpox-ridden blankets. There’s far too many moments where the script demands that Kent remind everyone “not all white men” that any appearance of care or understanding is quickly wiped away.

But it’s not just Sweeney’s performance that is lacking; there’s practically no chemistry among the entire cast, save for 97-year-old Dave Bald Eagle (who died shortly after the film was completed) and Richard Ray Whitman (“Drunktown’s Finest”), who plays Grover, Dan’s younger buddy. Both men are authentic, perceptive, and have a knack for delivering feeling through small, subtle motions and moments of quiet observance. It’s a shame that their performances are dragged down by an ensemble that can’t quite get there as a unit.

Simpson may have had many shortcomings in some aspects, but his talents shine in the cinematography and editing. The way he frames a coffee-shop scene saves a poorly-written exchange which, left in worse hands, could have been a cringe-inducing disaster. In that sequence, Simpson shoots only in the lower half of the screen, opting to focus on the three men’s reactions (or non-reactions, as the case may be) to the classist and racist exchange being uttered just feet away from them.

What “Neither Wolf Nor Dog” forgets to consider — and this may be because Simpson is from Scotland — is just how often white Americans have appropriated, co-opted, and stolen the stories of the Native American people. There are plenty of movies that celebrate white saviors and their triumphs, while marginalized people, such as that of the Lakota tribe, are reduced to teachers, magical healers, and showcased exclusively for their pain. That premise — joined by terrible direction, poor acting and an even worse script — is almost insulting and should be a lesson on how not to treat the stories of marginalized communities.