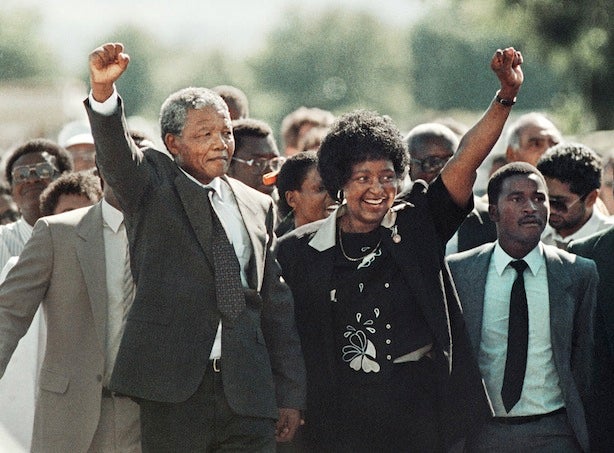 Revered South African leader Nelson Mandela wasn’t the symbol of the anti-apartheid movement until his wife Winnie Mandela made him one, a former secret agent told TheWrap on Sunday.

Jean-Yves Ollivier (pictured left), the subject of a new documentary called “Plot for Peace,” said that in 1978 Winnie Mandela changed a slogan of the African National Congress from “Death to Apartheid” to “Free Mandela,” and catapulted her imprisoned then-husband to become the face of the movement.

“For 17 years the name of Mandela was ignored,” he told TheWrap ahead of a premiere screening at the Hamptons Film Festival. “Nobody knew about Mandela. He was in jail, like many other militants of the ANC. Then Winnie Mandela, who over 17 years gained extraordinary position in the ANC, came in 1978 with an extraordinary idea. She said, ‘Why don’t we change the slogan of the ANC from a negative approach – Death to Apartheid – to a positive approach: Free Mandela?'”

He went on: “She created the slogan. He was her husband. This was her justification – she had reason to say this. He’s the father of her two children. She is a woman saying, ‘Free my husband.'”

Before that, said Ollivier, Mandela was merely an activist in the ANC but far from the most important official languishing in prison.  In the 1980s, the imprisoned Mandela became the preeminent symbol of the black South African liberation movement. Artists, musicians and activists around the world adopted Mandela’s name and image in demanding that the white-led regime change its racist policies.

Mandela was released in 1990 after 27 years of captivity and went on to be elected the president of the country. He is often called “the father of the nation.”

In failing health, Mandela is not among the leaders interviewed in the film but many others including Winnie Mandela, former South African foreign secretary Roelof “Pik” Botha and other white South African and black ANC leaders give interviews.

Ollivier – known at the time only as “Mr. Jacques” —  played a secret role in ending apartheid, as the film reveals for the first time. An Algerian-born

Michael LeDeen, a former adviser on the National Security Council during the Reagan administration, was part of those negotiations and attended the screening and a panel discussion afterward on Sunday. “The thing that’s unique about Jean-Yves is that he figured out it was possible for a single person to change the world — despite big organizations, armies and he found a way to do it,” LeDeen told TheWrap.

Winnie and Nelson Mandela divorced after his release.