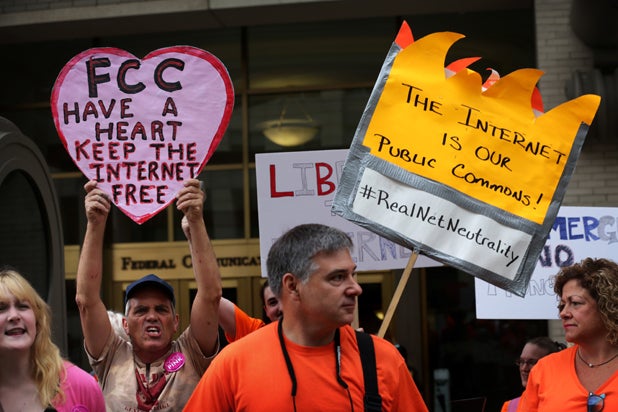 Net Neutrality supporters aren’t exactly jumping for joy over the Federal Communications Commission Open Internet action today, but many are more pleased than they expected to be and they are congratulating themselves.

While still concerned that the FCC didn’t go far enough toward Net Neutrality, supporters noted that the final version of the FCC Chairman Tom Wheeler‘s proposal opens up the possibility the agency could eventually move to much stronger language  including a ban paid prioritization of Web content.

Among the Net Neutrality supporters is President Obama.

“The President has made clear since he was a candidate that he strongly supports net neutrality and an open Internet,” said White House Press Secretary Jay Carney in a statement. “

The President has credited the Internet’s incredible equality — of data, content, and access to the consumer — with powering extraordinary economic growth and making it possible for once-tiny sites like eBay or Amazon to compete with brick and mortar behemoths.

“The FCC is an independent agency, and we will carefully review their proposal, but Chairman Wheeler (right) has said his goal is to preserve an open Internet, and we are pleased to see that he is keeping all options on the table,” the statement continued. “We will be watching closely as the process moves forward in hopes that the final rule stays true to the spirit of Net Neutrality.”

“It’s amazing to see what an impact artists continue to have on this process,” he said in a statement. “We’re encouraged that the FCC is starting to ask some of the right questions about how to keep the Internet open for creativity and entrepreneurship. But we all need to keep the pressure on to make sure that the rules we end up with prevent any and all discrimination of lawful online content.”

“We remain concerned that the proposed approach could legalize discrimination, harming innovation and punishing U.S. consumers with a broadband experience that’s worse than they already have,” the company said in a statement. “Netflix is not interested in a fast lane; we’re interested in safeguarding an Open Internet.”

The ACLU, for its part, said the proposal still leaves consumers subject to the whim of gatekeeper in an increasingly concentrated market, but the FCC left open a door to fix the problem.

“This is a First Amendment issue because if broadband service providers are allowed to slow or block some content at will, they will be able to stifle the speech of internet users,” said ACLU policy adviser Gabe Rottman, “The FCC must ensure that it has the tools necessary to prevent such blocking or discrimination against certain types of content.”

Sen. Al Franken, D-Minn., had some of the harshest words for the FCC’s proposal, slamming it as “woefully misguided.” He warned that unless the FCC made further changes the Web could be in danger.

“Today’s vote could spell the beginning of the end of the Internet as we know it, plain and simple,” he said. He called Wheeler’s proposal a step towards handing the Internet over to big corporations who can pay boatloads of money for preferential treatment.

Critics of Net Neutrality, including some big Internet service providers and some Republican congressmen, on the other hand, suggested the FCC had gone too far.

“But one thing is clear: For the FCC to impose 1930s utility regulation on the Internet would lead to years of legal and regulatory uncertainty and would jeopardize investment and innovation in broadband,” he said in a statement.

The two Republican leaders of the House Energy and Commerce Committee, Chairman Fred Upton, R-Mich., and the panel’s telecom committee chairman Greg Walden, R-Ore., both ripped the FCC action and promised a “spirited discussion” with Wheeler when he testifies at a committee hearing next wee.

“Free from regulation and government meddling, the Internet as we know it has thrived,” they said in a joint statement. “Sadly, these unnecessary rules the commission proposed today will have a chilling effect on job creation and innovation without any corresponding consumer benefit. These rules are a solution in search of a problem.”