Netflix says it will no longer work with the Hollywood Foreign Press Association (HFPA) until the beleaguered organization undergoes significant changes, according to a letter sent Thursday to HFPA by Netflix co-CEO Ted Sarandos.

“Like many in our industry, we’ve been waiting for today’s announcement in the hope that you would acknowledge the breadth of issues facing the HFPA and provide a clear roadmap for change,” Sarandos wrote.

An individual with knowledge of the situation confirmed that the letter had been sent to HFPA by Sarandos. Netflix declined to comment on the letter. The HFPA did not immediately respond to request for comment. 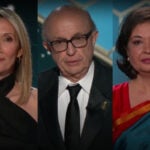 The letter came on the same day that it was announced that a majority of HFPA’s 86 members voted for an overhaul of the organization that is to include steps toward inclusion. HFPA has been under fire in recent weeks following a Los Angeles Times story that called out the organization for having no Black members, along with other institutional and structural problems.

“Today’s vote is an important first step,” Sarandos said in the letter. “However, we don’t believe these proposed new policies — particularly around the size and speed of membership growth — will tackle the HFPA’s systemic diversity and inclusion challenges, or the lack of clear standards for how your members should operate…So we’re stopping any activities with your organization until more meaningful changes are made.”

“We know that you have many well-intentioned members who want real change – and that all of us have more work to do to create an equitable and inclusive industry,” Sarandos wrote in conclusion. “But Netflix and many of the talent and creators we work with cannot ignore the HFPA’s collective failure to address these crucial issues with urgency and rigor.”

With its declaration, Netflix become another in a line of entertainment industry entities that have criticized or cut ties with HFPA since its diversity problem and other issues have surfaced, including a consortium of 100 publicists who said on Friday that they would continue an HFPA boycott, calling HFPA’s planned reforms “sorely lacking and hardly transformational.”