A group of composers from seven leading shows on Netflix debated the challenges of mapping a musical score to the tone and narrative of shows from “Bridgerton” to “The Crown” to “David Attenborough: A Life on Our Planet,” in a discussion led by TheWrap.

Aside from the steamy romance at the heart of Netflix’s Shonda Rhimes-produced Regency-era drama, “Bridgerton” is probably best known for its music, a very distinct mesh of classical songs by famous composers like Johann Sebastian Bach and Antonio Vivaldi and instrumental covers of modern-day pop tracks by the likes of Ariana Grande and Billie Eilish.

The man in charge of bridging the gap between these very different styles, and coming up with the original score that would bind them, was “Bridgerton” composer Kris Bowers. However, Bowers gives a lot of the credit to showrunner Chris Van Dusen for having a “clear” vision for the sound of the period piece, which is based on Julia Quinn’s novel series of the same name, from the beginning.

“A lot of that work is done by Chris and the editors as they’re working on each episode,” Bowers said during TheWrap’s Emmy Contenders Showcase celebrating composers on a range of Netflix shows. “Chris had a really clear idea of what he wanted emotionally and where he wanted music to happen. And, really, it was just trying to figure out how to fit in that sound that was being created by those other elements … So having something that can feel like it made sense next to both of those things. And really, that just came down to instrumentation and thinking about feel and tempo.”

Along with Bowers, TheWrap’s Netflix composers panel, which was moderated by awards editor Steve Pond, included “The Crown’s” Martin Phipps; Stephanie Economou of “Jupiter’s Legacy;” Osei Essed of “Amend”/”High on the Hog;” Steven Price of “David Attenborough: A Life on Our Planet;” and Carlos Rafael Rivera of “The Queen’s Gambit.” 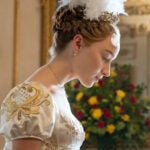 Also Read:
‘Bridgerton': Here Are All the Modern Songs That Get Classical Covers

Bowers said the key to “Bridgerton’s” choice of pop covers is that “all that music is dance music.”

“It’s all social music, music that we’re supposed to feel like we want to move to, and things like that. So with that in mind, a lot of the classical pieces are things that we maybe don’t know how to move to as much — or as easily as Ariana Grande. So I feel like in that sense, with any of the score, trying to write things — especially anything that was during ball sequences or anything that we wanted to have some sort of pace to — having that be something that felt like, I at least, wanted to move and dance to, I think that helped me.”

Another Netflix composer that focused heavily on movement to guide him this year was Phipps, who had the pleasure of writing the music that would usher in Emma Corrin’s portrayal of the iconic Princess Diana.

“I mean, what a character to score,” Phipps said. 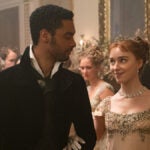 “I think, as with a lot of stuff on Season 4 that I did, we tried to be a little understated when you might feel that it would be a big moment,” he said, recalling the harp that was used during Diana’s first scene. “So the bigger the moment, quite often, the less we played it. And in some of the smaller moments, we played it big.”

Phipps still went as “bright and brash and sparkly” as he could with Corrin’s Diana, when the moment called for it.

“She is the ’80s, as far as I’m concerned. I grew up with her in the ’80s and she was a massive part of that,” he said. “And therefore, although I didn’t want to suddenly get all ’80s synth about things, I did really want to kind of embody the breath of fresh air that she blew into this establishment and this very uptight family setup that she entered. So we had to find a way of doing that musically. And there were a couple of moments that are especially around the kind of ‘Di-mania,’ a real fan sequence is when she’s on a parade in Brisbane in Episode 6. And there I got bright and brash and sparkly as I could within ‘The Crown’ world.” 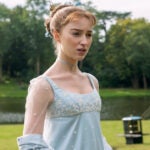 Watch TheWrap’s full Emmy Contenders panel with the composers via the video above.