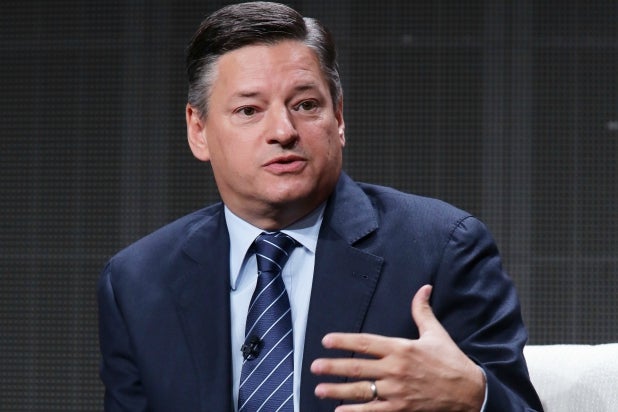 The head content executive at Netflix said Monday that the streaming service hosts what would be the most-watched show on cable.

Asked about outside ratings estimates for Netflix shows by the likes of Nielsen that put the company’s programs among the most-watched on non-broadcast television, Ted Sarandos said, “I think we’re No. 1,” speaking at the UBS Global Media and Communications conference in New York.

The subscription streaming giant’s chief content officer said that his platform’s popularity reflects a fundamental change in consumer behavior, shifting from watching TV on a schedule to viewing on demand.

Also Read: Netflix and Other Streaming Services Hog 70 Percent of the Internet

“If you want to make money, you need to sell [your content] here,” he said of traditional programmers.

Netflix, as the biggest online subscription video service by total users, is one of the strongest forces changing how people watch TV and the kinds of content they choose to view. Sarandos said Netflix’s aggressive expansion overseas this year and next — and the company’s effort to secure global rights to content — is rankling traditional programmers, for example.

“It’s something our studio partners are struggling with,” he said Monday. He noted that rights tend to be sold regionally, and so Netflix has faced a bumpy road negotiating for those broader rights when regional sellers are wary of their jobs becoming obsolete.

Sarandos, who will command a more than $5 billion budget next year, declined to provide hard figures to back up statements about the audience for Netflix’s shows. Rather than putting stock in ratings like those from Nielsen, his company tracks hours of viewing per user internally, and says outsiders should pay attention to net subscriber growth. That member growth has cooled in the U.S. recently, as Netflix has focused on expanding to 200 countries by the end of next year.

Sarandos did provide some anecdotal indications of Netflix’s audience.

Aziz Ansari, star and producer of series “Master of None” can’t walk down the streets of New York anonymously because of the success of the series, he said. Ansari previously appeared on NBC’s “Parks and Recreation” for six years.

“Daredevil” and “Jessica Jones,” two programs derived from Disney’s Marvel universe of intellectual property, are “neck-and-neck” in terms of their viewing popularity on the platform, he said. “A Very Murray Christmas” was a “top 10 show” in Japan, he added, also noting that half of Netflix households regularly watch kids content.

Also Read: Netflix in December: What's New, What's Leaving, and What to Watch

Next year, the company will increase its output to 31 scripted series, up from 16 this year, in addition to making 30 kids series, 10 feature films and 10 stand-up specials.

One area in which Netflix has no interest: nightly news. After saying earlier this year that Netflix is likely to compete with Vice soon, Sarandos said he was referencing that digital media powerhouse’s edgy documentaries, not a live nightly news broadcast like Vice’s partnership with HBO.

Sports will also remain the domain of live-video operations, not Netflix, he said. He added the caveat that should Netflix figure out a model where it creates its own league, “then that would be interesting.”