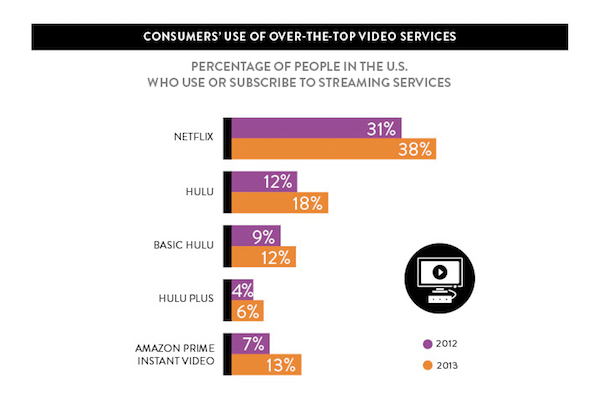 Netflix and Hulu users don’t snack on “Breaking Bad” or “House of Cards.” When it comes to the shows they love to stream, subscribers are positively voracious, a new study by Nielsen Media finds.

This look at the binging behavior of the streaming crowd revealed that 88 percent of Netflix users and 70 percent of Hulu Plus users report watching three or more episodes of the same TV show in one day.

The ability to watch multiple episodes or even entire seasons of certain programs in one sitting is shifting the way viewers consume content and potentially imperiling those “water cooler” moments that once compelled TV audiences to catch their favorite programs when they first aired.

To come to its conclusions, Nielsen polled 2,000 consumers, including 1,000 Netflix users and 600 Hulu users.

Roughly 58 percent of those surveyed said they prefer to view shows after they have aired, so they can watch several episodes consecutively. Those kind of viewing habits have impacted the way that Netflix, which recently made a series of big bets on original programming like “House of Cards” and “Orange is the New Black,” is releasing its new shows. Instead of debuting new episodes of its programs on a weekly basis, Netflix releases entire seasons simultaneously.

When it comes to streaming services, Netflix remains the most popular despite heavy competition from deep pocketed rivals. Thirty eight percent of consumers reported that they used the red envelope company as their streaming service of choice compared to 6 percent for Hulu Plus and 13 percent for Amazon Prime.

Nielsen also found that the way that consumers are accessing the content is changing. Most users still rely on their computers to stream content, but the devices they use to watch programs on Hulu and Netflix are becoming more diverse.

Instead, more subscribers are watching shows on mobile phones and internet-connected TVs. The number of Netflix users watching content on smartphones, for example, more than doubled to 23 percent this year, while the number of Hulu Plus users increased from 10 percent to 17 percent. Likewise, the number of subscribers watching programming on internet-enabled TVs rose from 12 percent of Netflix users in 2012 to 17 percent in 2013 and 9 percent of Hulu Plus users in 2012 to 14 percent in 2013.