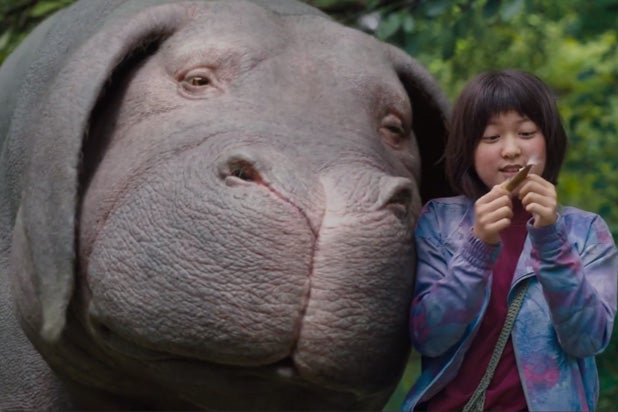 The early morning press screening of the Netflix film “Okja” was interrupted by boos and angry applause in the Palais des Festivals on Friday at the Cannes Film Festival in France — particularly at the appearance of the company’s logo at the start of the film.

The streaming service has divided film professionals at the festival, though some of the boos were also aimed at problems with the sound and framing at the Grand Theatre Lumiere, where the film was shown.

At the 8:30 a.m. screening of the movie, a competition entry directed by Korean filmmaker Bong Joon Ho, a smattering of boos greeted the initial appearance of the Netflix logo on screen, as well as other mentions of the streaming service in the opening credits. As the opening scene continued and sound and framing problems became evident, the boos and derisive shouts did not subside, and some in the audience began rhythmically clapping.

The screening was stopped after less than 10 minutes, according to TheWrap’s Steve Pond, who was present. When the film restarted, the Netflix logo was once again booed, though by fewer people. The rest of the film played without incident.

At the end of the screening, the audience responded with significant applause and no boos.

The Cannes press office released this statement as the screening ended:“A technical incident disrupted the beginning of the screening of Bong Joon ho’s film, ‘Okja,’ which was shown this morning at a press screening at the Lumière Auditorium. The session was interrupted for a few minutes but was then able to carry on as normal.

“This incident was entirely the responsibility of the Festival’s technical service, which offers its apologies to the director, his teams, the producers and the audience at the showing.”

Cannes audiences are notoriously opinionated and often show their reactions at screenings.

Netflix has two films in competition, “Okja” and Noah Baumbach’s “The Meyerowitz Stories.” French exhibitors are angry that the festival accepted films that do not have a theatrical release first, and consider Netflix a threat to the established order of large-screen filmgoing.

The issue has even divided the Cannes jury. Jury President Pedro Almodovar seemed to rule out voting for either of the Netflix films at the opening press conference for the festival this week, while another jury member, Will Smith, defended streaming movies.