Netflix is pausing all future projects and acquisitions of shows and films in Russia amid Vladimir Putin’s invasion of Ukraine, a source confirmed to TheWrap.

The person with knowledge of the decision says that Netflix is assessing the impact of current events, alluding to the ongoing violence in the region. Netflix has four different Russian-language series in either production or post-production, including one that wrapped filming in December last year, another called “ZATO” that has been paused, and an untitled show that is wrapping shooting. 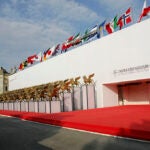 TheWrap reported earlier this week that Netflix would not be complying with a Russian regulation to carry 20 state-run TV stations on its service, a rule that applies to any services with more than 100,000 subscribers, of which Netflix is the only international streamer to meet that threshold in Russia.

And their actions follow those of many other Hollywood studios in response to Putin’s aggression, in which the theatrical releases of “The Batman,” “Turning Red,” “Morbius,” “The Lost City,” “Sonic the Hedgehog 2” and “Ambulance” have all been halted. Other European film festivals have also received calls to boycott Russian artists from their events, and Venice and Cannes have both responded blocking Russian delegations and government officials specifically, while not blocking the independent Russian artists or films themselves.