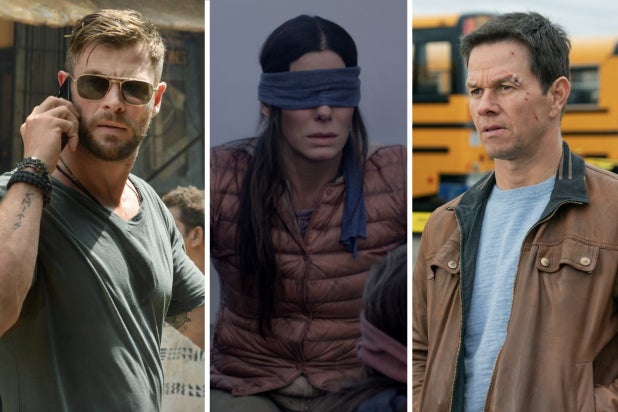 Netflix has unveiled a top 10 list of its most viewed films in their first four weeks of release that includes recent star-studded action films like “Extraction,” “Bird Box,” “Spenser Confidential” and “6 Underground” topping the list.

Netflix tends to only release selective viewership data and is highly secretive beyond that, but Bloomberg acquired a list of the 10 most popular films as part of a larger feature on action films.

“Extraction” starring Chris Hemsworth and produced by the Russo Brothers topped the list and earned 99 million viewers in its first four weeks of release when it debuted this summer. “Bird Box,” the horror thriller starring Sandra Bullock and released late in 2018, received 89 million viewers in the same time frame.

While a majority of the films were action films with big stars, including Mark Wahlberg in “Spenser Confidential,” Ryan Reynolds in Michael Bay’s “6 Underground” and “Triple Frontier” with Ben Affleck, some comedies did make the list, most notably the Adam Sandler and Jennifer Aniston comedy “Murder Mystery,” which notched 73 million views according to Netflix. The Oscar-nominated “The Irishman” from Martin Scorsese also made the list with 64 million views.

Bloomberg also notes that all 10 of the movies were released within the last three years, with most coming in the last calendar year. Netflix has added 43.6 million new subscribers since the start of 2019.