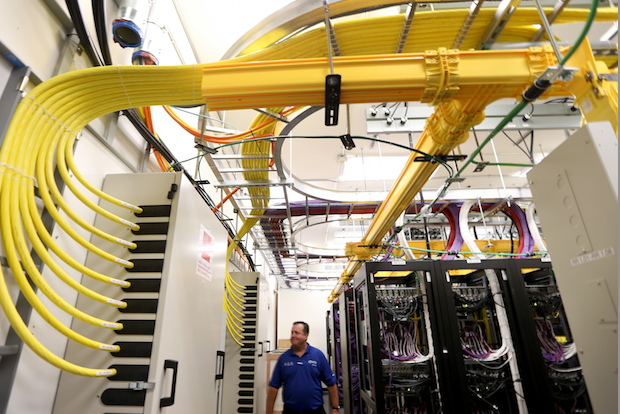 Netflix has fired another salvo in the war over net neutrality.

The company slammed internet service providers Thursday for trying to turn the web into a tiered system, where richer companies get faster access to customers — all while accusing Comcast of failing to support net neutrality regulations.

“Comcast has been an industry leader in supporting weak net neutrality, and we hope they’ll support strong net neutrality as well,” Netflix CEO Reed Hastings argued in a blog post.

Hastings remarks come as net neutrality, a term that refers to preventing internet providers from favoring or charging tolls for access to certain channels and services, is being hotly debated.

The issue is back in headlines because of Comcast’s proposed $45.2 billion purchase of Time Warner Cable, which if approved would give it control of one-third of U.S. broadband households.

In order to earn regulatory approval for its 2011 purchase of NBC Universal, Comcast agreed to embrace the Federal Communications Commission’s open internet rules until January 2018, whether or not they were overturned in court.

Comcast used its endorsement of those guidelines in a blistering response to Hastings’ charges.

“There has been no company that has had a stronger commitment to openness of the Internet than Comcast,” David L. Cohen, Executive Vice President of Comcast, said in a statement. “We supported the FCC’s open internet rules because they struck the appropriate balance between consumer protection and reasonable network management rights for ISPs. We are now the only ISP in the country that is bound by them.”

As it stands, Comcast is the only internet service provider legally obligated to adhere to the commission’s net neutrality guidelines. It has said it is willing to apply those rules to any Time Warner Cable properties it acquires.

The terms may be esoteric, but the impact could be acutely felt in American homes, the Netflix chief claimed. A recent U.S. Court of Appeals for the District of Columbia ruling overturning the Federal Communications Commission’s open internet rules threatens the concept of net neutrality and could make the digital economy less democratic, Hastings argued in a blog post.

“Without strong net neutrality, big ISPs can demand potentially escalating fees for the interconnection required to deliver high quality service,” Hasting wrote. “The big ISPs can make these demands — driving up costs and prices for everyone else — because of their market position. For any given U.S. household, there is often only one or two choices for getting high-speed Internet access and that’s unlikely to change.”

Critics of the Time Warner Cable deal argue that Comcast would become so big it will essentially act as gatekeeper to the internet. It’s an issue that pits Silicon Valley companies against cable giants and the charges and counter charges will likely grow louder as Washington lawmakers begin weighing in on the deal during hearings this spring.

In his blog post, Hastings noted that last month Netflix agreed to pay higher fees in order to directly connect its content delivery networks to Comcast’s networks. That’s standard practice for other internet companies such as Google, but it is a move that Netflix had long resisted until it became clear that by holding out it risked offering its customers slower service.

“Netflix believes strong net neutrality is critical, but in the near term we will in cases pay the toll to the powerful ISPs to protect our consumer experience,” Hastings wrote. “When we do so, we don’t pay for priority access against competitors, just for interconnection. A few weeks ago, we agreed to pay Comcast and our members are now getting a good experience again.”

Comcast’s Cohen said that Hastings was wrong to equate the issue of paying for internet interconnection with that of net neutrality. When the deal with Netflix was announced, the companies made a point of stating Netflix will receive no preferential treatment on Comcast’s network.

“The Open Internet rules never were designed to deal with peering and Internet interconnection, which have been an essential part of the growth of the Internet for two decades,” Cohen said.

He went on to say: “Providers like Netflix have always paid for their interconnection to the Internet and have always had ample options to ensure that their customers receive an optimal performance through all ISPs at a fair price. We are happy that Comcast and Netflix were able to reach an amicable, market-based solution to our interconnection issues and believe that our agreement demonstrates the effectiveness of the market as a mechanism to deal with these matters.”