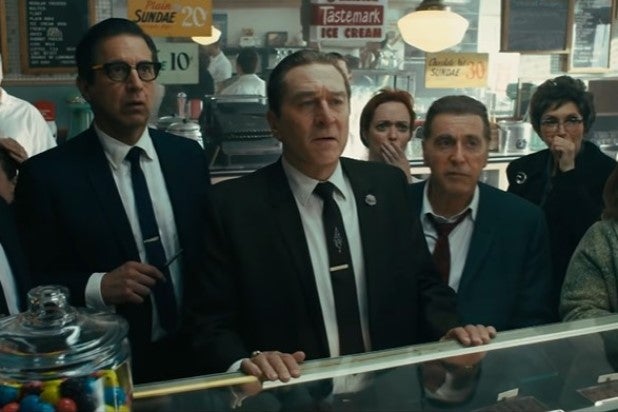 President of the National Association of Theater Owners (NATO) John Fithian has called the short theatrical run of Netflix’s “The Irishman” a “disgrace.”

“It’s a very big disappointment that Netflix and the leading theater owners couldn’t figure out a way to put a significant movie from Martin Scorsese on a lot of screens,” Fithian told the New York Times. “This is a major director, a cinephile, who has made all kinds of important movies for our industry. And ‘The Irishman’ is going to play on one-tenth of the screens it should have played on, had Netflix been willing to come to an understanding with our members.”

NATO is a group that represents the interests of theater chains like AMC and Cineplex.

“Netflix is leaving significant money on the table,” Fithian added. “Think about ‘The Departed,’ in 2006. That Scorsese movie made $300 million globally. It garnered Scorsese the best director Oscar. It won best picture. It played for a long time in theaters and made a ton of money. Why wouldn’t Netflix want to monetize that before it went to Netflix? It can still be exclusive on Netflix. It can still draw subscribers. It would still be the only place you can see it at home.”

In a statement to TheWrap, Fithian added: “There was an opportunity here for Netflix to break new ground. In a rapidly changing competitive landscape, Netflix failed to recognize the advantage a full theatrical release for ‘The Irishman’ could give them with consumers and filmmakers. Their competitors won’t make that mistake.”

Netflix had no comment, however, Scott Stuber, Netflix’s head of original films, told the Times: “For ‘The Irishman,’ it was important for us to give it that theatrical run, to put it in big houses where people could congregate and have the opportunity to see it that way. But I also think people are going to love it just as much on Netflix.”

The Martin Scorsese-directed drama is screening in only eight theaters this weekend in Los Angeles and New York before it will have a 26-day run in limited theaters. It starts streaming on Netflix on Nov. 27. Typically, major exhibitors insist on 72-day periods of exclusivity before films go on streaming platforms and home video.

According to the Times, representatives of two major theater chains agreed, independently, to lower that number to around 60 days. Netflix said it would not go over a 45-day exclusivity window. On Nov. 8, the movie will play in small movie theaters in the country’s top 10 markets, and it will then roll out to more theaters in the following weeks. Last year’s “Roma” had a 21-day exclusive release before it started streaming. Netflix then said the movie played on roughly 1,100 screens.

Scorsese’s movie had a budget of $160 million and was not a film that many studios wanted to take on due to the budget and the elaborate de-aging process required for the cast that consists of Al Pacino, Robert De Niro and Joe Pesci.

Also Read: The Luck of 'The Irishman': How One Man's Bookstore Visit Led to Producing the Martin Scorsese Hit (Guest Blog)

Earlier this week, the studio heads from the “Big Five” and Netfiix and Amazon took part in a roundtable discussion for The Hollywood Reporter and agreed that only Netflix could have produced “The Irishman.”

“It was very ambitious for a studio to take on a project like that. There is a different perception of the economics. For us, at that level, for a period drama — or for anyone, I would submit — it was ambitious. And it was perhaps too ambitious,” Paramount’s Jim Gianopulos said.

Warner Bros.’ Toby Emmerich added, “That’s where the consumer wins. I don’t think any of the studios could make that movie at that cost at that length and come out alive… The only difference for us, and maybe for the average consumer — I’ll bet everyone at this table wants to see ‘The Irishman’ in a theater.”