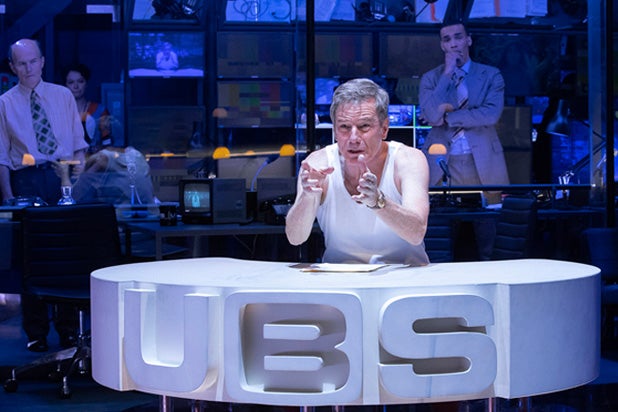 Bryan Cranston in no way recalls Peter Finch’s Oscar-winning performance as the crazy TV newcaster Howard Beale in the 1976 film “Network.” With true inspiration, Cranston instead conjures up an out-of-work, burnt-out Bill O’Reilly in the new staging of “Network,” which opened Thursday at the Belasco Theatre after a recent run at London’s National Theatre.

Lee Hall (“War Horse”) adapts Paddy Chayefsky’s screenplay, and has been very faithful in his transfer to the stage. What’s different about “Network” on stage, in addition to Cranston’s awesome portrayal, is Ivo van Hove’s very kinetic and immersive direction. He repeats many of the more outlandish flourishes of his recent production of “The Damned” at the Park Avenue Armory, but where the vast environs of that performing space dissipated the impact, the intimate stage at the Belasco allows van Hove to create a dense, overloaded environment of images that force a battle between the live actors and the electronically projected miasma engulfing them.

Say what you want about the power of live performance, audiences will inevitably gravitate to the big jumbotron image over the real and tiny thing every time. Van Hove’s direction, Jan Versweyveld’s lighting and sets, and Tal Yarden’s videos not only acknowledge that audience preference, they turn it into an addiction and make it central to what this “Network” is all about.

Indeed, the first hour of “Network” is absolutely mesmerizing. The network execs, producers, writers and technicians who put on Howard Beale’s nightly newscast are so bombarded with visual garbage that they’re too numb to notice that their star newscaster has just announced his own suicide on national TV.

We can identify in a way that we never could in a movie theater. Behind Cranston and his news desk, fellow theatergoers are having drinks on one side of the stage while most of the other actors are enclosed in a glass booth, separated from the real-life drama in front of them as one big screen projects commercials, old movies, sitcoms and competing newscasts.

These images are replicated elsewhere on smaller screens around the stage and the theater. Cranston is the star, but he’s only part of the show, and often times our attention is being diverted. Electronic media has a way of doing that — distracting us from what’s real, as well as what’s important.

That’s the first and wonderful half of “Network.” But as with the movie, “Network” on stage becomes overwhelmed by Chayefsky’s pontificating about the evils of modern society — and Hall isn’t a very judicious editor. The romantic affair between the new TV producer Diana Christensen (Faye Dunaway in the movie) and Beale’s old colleague Max Schumacher (William Holden in the movie) isn’t dramatically motivated.

After Schumacher is fired for wanting to protect his friend Beale from public humiliation, Christensen has no reason to continue their romance. She’s the epitome of commercial crassness; everything is transactional for her, and Schumacher has outlived his usefulness. The only reason their relationship exists is to spice up an already flagging script.

On stage, van Hove attempts to distract us by recording live on the sidewalk in front of the Belasco Theatre the meet-cute reconciliation of Diana (Tatiana Maslany, being enigmatic) and Max (Tony Goldwyn, being gracious). On one level, it’s interesting. The public is so conditioned to seeing reality-TV crews on the streets of Manhattan that passersby on West 44th Street don’t even give Maslany and Goldwyn a second glance as the two actors perform their roles in front of a handheld camera.

Maslany and Goldwyn are closer in age than Dunaway and Holden were in the film. Still, Max’s speech about Diana being part of the Bugs Bunny generation is not only terribly superior and ageist, it’s also just wrong: Bugs Bunny was a much bigger icon for Holden than anyone in Dunaway’s generation. And isn’t it time we put to rest the myth that Edward R. Murrow, who brought us “Person to Person,” held reign over a vast repository of great journalism, as if in-depth exposes could ever be produced within the limited short-segment dictates of 1950s television?

Van Hove’s environment of TV imagery dissipates as Chavefsky’s preaching intensifies. At one point, Cranston leaves the stage to sit on the armrest between two theatergoers in the audience. We’ve just been told that TV distracts us. Now van hove and Cranston show us how the theater can also play tricks. Who cares what Cranston’s character is saying as we watch, on the DumboTron screen, the embarrassed and/or amazed looks of the theatergoers sitting around the star?

On its release in 1976, “Network” was hailed as prescient in its analysis of how the news had become entertainment. That prescience has changed. Now the shock of “Network” is how much “mad as hell” masquerades as political activism.