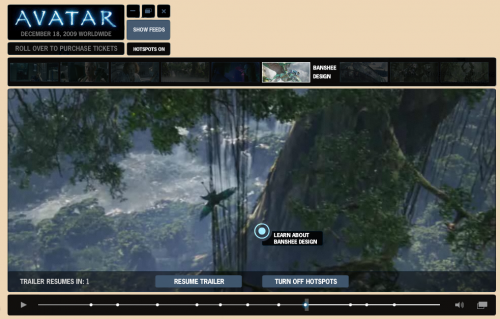 It’s more than a trailer — it’s an immersive experience.

What 20th Century Fox is calling an interactive trailer debuted today at avatarmovie.com, and it is chock-full of information about the world of James Cameron’s upcoming 3D sci-fi epic, which opens Dec. 18.

Using Adobe AIR software, the interactive trailer, once downloaded, resides on the user’s desktop. Fox says it will be continuously updating the trailer and its accompanying media libraries. Updates will be seamlessly distributed to those who have downloaded the Adobe AIR software.

The trailer has interactive "hot spots" that, when clicked, open all-new featurettes offering insight into the production, whether through Michelle Rodriguez or Sigourney Weaver discussing their characters, or special effects artists talking about the design process for the "Banshees" or the Amp Suit.

Also available: Links to buy tickets, menus that load "Avatar" social networking feeds from Flickr, YouTube and Twitter, and daily updated information about the movie and a countdown to its opening.