Last week, the complaint was that "The Hurt Locker" wasn’t factual enough.

Now, the complaint is that it’s not fictional enough.

In the latest controversy to hit the Oscar-nominated movie – which, like all the other controversies over the film during the final week of balloting, immediately received prominent coverage in the Los Angeles Times – Master Sgt. Jeffrey Sarver says, through his lawyer, that he plans to file a multi-million dollar lawsuit against the makers of the film on Wednesday.

The former Army bomb tech alleges that Sgt. William James, the character played in the film by Jeremy Renner, is based on Sarver, and the situations depicted in the movie all happened to him while screenwriter Mark Boal was embedded in his unit as a journalist in 2004.

He also claims he coined the phrase “the hurt locker,” which Boal says is common military slang. 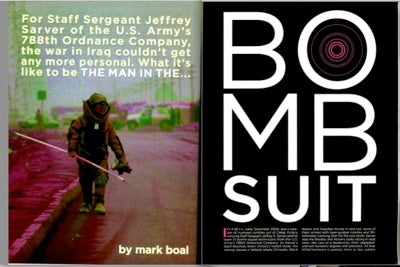 Boal wrote an article about his experiences for the September 2005 issue of Playboy magazine (right). After the story ran, he began to write a screenplay about a bomb squad in Iraq, using characters that he told theWrap were “in some ways composites, and in some ways pure fiction. They’re fictional, but I do think they’re recognizable types.”

I’ve read the Playboy article, which focuses on Sarver and his bomb team. There’s one significant aspect of Sarver that’s also present in Sgt. William James, the character that Renner plays: the “methlike surge of adrenaline” that disarming bombs gives him.

Otherwise, the characters seem dramatically different. Sarver comes across in the story as a good team member, not a maverick who upsets those around him. When he goes back home after his tour in Iraq, he ends up hunting in the woods, not bewildered by a supermarket; his home is full of guns and mounted animals he’s killed, and he doesn’t even see his son until he’s been home for weeks.

Unless Boal decided to save some of the most fascinating parts of Sarver for the movie he didn’t know he was going to write, the Sarver = James equation just doesn’t work.

And although the suit alleges that the screenplay is “adapted from” Boal’s Playboy article, few of the scenes from the story appear in any recognizable form in “The Hurt Locker.”

Both the Writers Guild and the Academy have determined that the screenplay was original, not an adaptation of the article.