“New Girl” is a true ensemble comedy, although the title and all that annoying “Adorkable” marketing would lead many to see Zooey Deschanel as the lone star. In some ways, her Jessica Day definitely steers the vehicle, but to ignore the talents of her leading men would be a mistake — and the Fox sitcom really didn’t miss a beat while the actress/singer was recently away on maternity leave.

Jake Johnson and Max Greenfield both established themselves early on in the series, and Damon Wayans Jr. is always an on-screen force — you know, when he’s actually on screen. Meanwhile, over the last few seasons, Lamorne Morris‘ Winston Bishop has broken out, and Hannah Simone‘s Cece seems to be catching up.

But let’s be honest, you really tune-in for one mammal — and it’s not a human at all. Enter: Furguson the cat.

In the magical world of television, the fluffy Furguson belongs to Winston, who lives in the loft with everyone else. In real life, Furguson is owned by Cheryl Shawver of Animal Actors of Hollywood — and Morris is allergic to cats. This creates a bit of a issue on-set.

Also forming a problem there, Morris admitted to TheWrap, is that Furguson (also the kitty’s real name, and spelled that way) is a beautifully lazy feline.

“Sometimes production has to be shifted around because of his schedule,” Morris said during our interview. “And that’s a real thing,” he reiterated, swearing they’ve had to adjust shooting around the animal’s trademark moodiness on multiple instances.

Sometimes, Morris added, the cat’s stubbornness can be “very adorable.”

At other times, “I want to lay hands on this cat!” he joked, prefacing the line with, “And don’t call PETA on me.”

(Chill out, PETA, he was totally kidding.)

Anyone who has a cat knows exactly what he means — even if yours look like these two perfect angels: 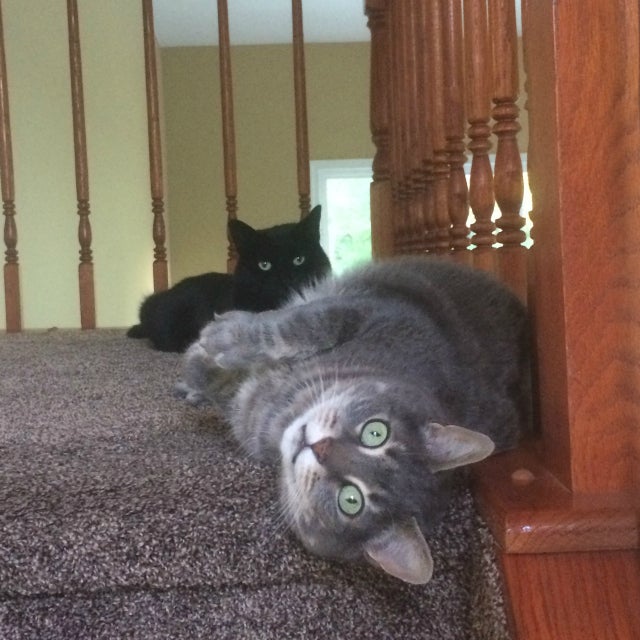 (Hey, give me a break — it’s Friday. That’s this writer’s Rory in the gray fur and Griswold in the black.)

Also Read: 'Son of Zorn' Star Cheryl Hines Explains How to Act With a Cartoon Character

“He’s just a cute cat,” Morris concluded of his tiniest TV roommate’s formal qualifications for the demanding role. “I’ll be honest with you — he’s a little trained,” he added, “But … Furguson does whatever Furguson feels like doing.”

Yep, limited to sneezing all over the Fox lot or not, Morris is officially a de-facto cat owner.