The news was a bombshell to Times staffers, many of whom live on the east side of Los Angeles or in nearby Pasadena. If new owner Patrick Soon-Shiong was trying to get people in those areas to quit, he couldn’t have done much better than telling their commutes — in Los Angeles’ infamous rush hour — were about to get much longer.

“Wow. New owner is moving the LA Times to El Segundo. (which is like 20 miles across a traffic hellscape from its current home Downtown, for those not familiar with LA),” former Times staffer Tim Logan tweeted. “That’ll go over well.”

A representative for Soon-Shiong did not immediately respond to TheWrap’s request for comment. But the Times reported that Soon-Shiong said the landlord of the paper’s downtown headquarters wants to increase rent by $1-million-a-month. Instead, Soon-Shiong wants to invest in hiring more journalists, improving newsroom technology and an eight-floor, modern building with free parking and other amenities, he said. Soon-Shiong’s wife, Michele, is leading the design.

El Segundo, Spanish for “the second,” is far from the first choice of location for many staffers, judging from initial reaction.

“Walked back into newsroom after Patrick Soon-Shiong announces @latimes will move to El Segundo — and everyone has Google Maps open on their screens, calculating new commute times,” wrote Times’ business editor Kimi Yoshino.

Times reporter Matt Pearce noted Soon-Shiong wants to make the paper into a powerhouse like the Washington Post. “A big problem for many people in the newsroom, however: We no longer own our historic downtown headquarters (thanks Tribune), and our lease ends in June,” tweeted Pearce.  “So today Soon-Shiong announced we’re moving to El Segundo, by LAX, which will greatly lengthen many of our staffers’ commutes.”

Speaking on behalf of the Los Angeles Times Guild, the paper’s recently formed union, Pearce expressed concerns about the move in a comment to TheWrap.

“We were glad to meet Patrick Soon-Shiong and were very excited to hear about his plans for reinvesting in our journalism. We have some concerns, however, that a move to El Segundo will greatly lengthen the commutes of many of our workers and also take some reporters away from the institutions they cover downtown,” said Pearce. “So we’re hoping to come up with proposals that can help alleviate some of the strain of a move.”

When the Times will move, and whether the move is permanent, remains unanswered.

The Times’ downtown headquarters — where it has been based since 1935 — is an Art Deco structure at 1st and Spring Streets within walking distance to City Hall and other Los Angeles landmarks, as well as the city’s Skid Row. But downtown has undergone a dramatic transformation in recent years, becoming a hipster haven with a thriving art and restaurant scene. 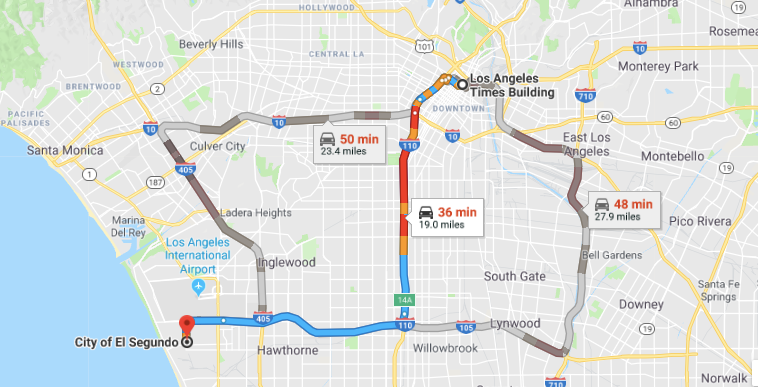 Times HQ to El Segundo City Hall is about 19 miles, per Google Maps

It has been a tumultuous 2018 for Los Angeles Times staffers. In January, the paper ousted editor-in-chief Lewis D’Vorkin after two months, and replaced him with Jim Kirk, the former interim editor. On Thursday, the Times parted ways with D’Vorkin. (In a statement, he said the decision was mutual.)

Tension with upper management spilled into public view in February, when Yoshino, the business editor behind the tweet above — was suspended and escorted out of the building. No explanation for her suspension was given.

In January, publisher Ross Levinsohn was suspended after an NPR report that he was accused of sexual harassment and made inappropriate remarks about women and gay people before he worked at Tronc, which owned the Times before Soon-Shiong announced his plans to take over. Levinsohn was cleared and given another job at Tronc.

The staff voted in a landslide to unionize in January.