The Pew Research Center’s Project for Excellence in Journalism just released a pretty fascinating study on new media versus old media, and what new media – blogs, Twitter, etc. – link to. Here are a few highlights:

>> According to the study, the vast majority of bloggers link to U.S. “legacy” outlets (like newspapers and broadcast networks) for their news – representing a striking 99 percent of the stories linked to, with 75 percent of ‘em going to American Web sites. Web-only sites, meanwhile, made up less than 1 percent of the links in the blogosphere, according to Pew. 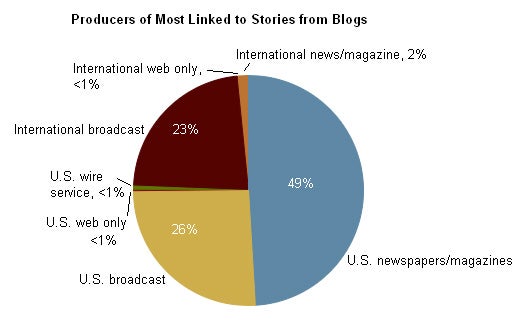 >> Of the incoming links, a few legacy outlets dominate the party. The BBC led the list of individual sources, accounting for 23 percent of the links studied, followed by CNN.com (21%), the New York Times (20%) and Washington Post (16%).

>> As far as what types of stories new media likes to link to, Twitter loves technology, especially stories about Twitter itself. (Not surprising that Twitter would be the most navel-gazey of all new media.)

>> Yet “the breaking news that trumped all else across Twitter in 2009 focused not on technology but on the protests following the Iranian election,” according to the report. “It led as the top news story on Twitter for seven weeks in a row — a feat not reached by any other news story on any of the platforms studied."

>> This, however, was a surprise: By and large, bloggers link to news reports rather than opinion pieces. 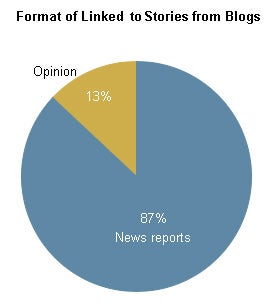 Check out an extended synopsis here – as well as the full study.