Matthew Belloni, former Editorial Director at The Hollywood Reporter, has joined as a founding partner for a new media company that will cover politics, finance, tech and entertainment, TheWrap has learned.

The yet-to-be-named platform plans to launch this summer and staff up to 20 people by the end of the year, a knowledgeable individual told TheWrap. The entity has raised $7 million in funding from TPG and 40 North. The board includes Jim Coulter, executive chairman of TPG, and David Winter, co-CEO of Standard Industries, 40 North Media’s parent company.

The site aims to compete with the Substack model, which has been attracting brand-name journalists to build their own businesses on that platform. Its model is also informed by The Athletic, the sports startup that aggressively hired top names in sports journalism, an insider explained.

Co-founders include Jon Kelly, a veteran of The New York Times and creator of Vanity Fair’s “The Hive,” CEO Joe Purzycki, a digital veteran of Vox Media and Luminary; Chief Strategy Officer Max Tcheyan, who was one of the early staffers of The Athletic; and COO Liz Gough, formerly of Conde Nast.

The site will be built as a subscription-based news service that will include newsletters, audio, and when the COVID-19 pandemic subsides, events. Invitation-only emails will be sent out to Belloni to Hollywood insiders as part of the venture’s launch. 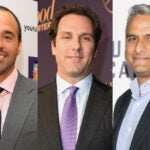 “Just like Hollywood, media is undergoing a dramatic transformation for the digital future,” Belloni said. “It’s super-exciting to bring my years of experience to building an innovative new company while continuing to cover an industry I care about so passionately.”

“Matt is a unique and generational talent—the Mike Allen of Hollywood, universally respected by industry insiders and observers,” says Jon Kelly. “We could not be more thrilled to partner with him to build this business at this crucial moment in the media industry.”

Belloni spent 14 years at The Hollywood Reporter, starting a new entertainment law section of the website and rising to become editorial director in 2017. He departed in May 2020 after reported disagreements with the heads of THR parent company Valence Media over editorial independence for the site.