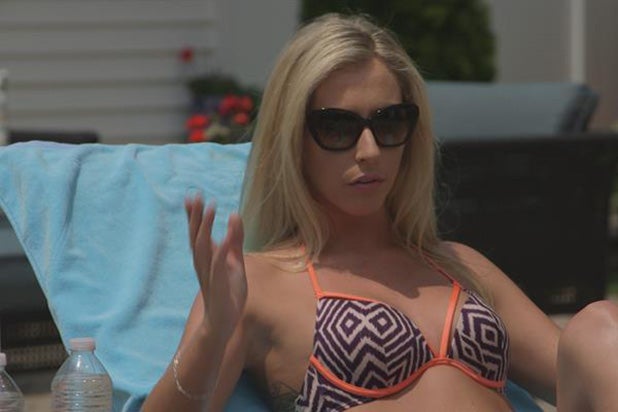 As VH1’s “Mob Wives” airs its final season, new cast member Brittany Fogarty wants her appearance on the show to change the way people think about “the lifestyle.”

In Wednesday’s episode of the reality series, Fogarty opened up to fellow cast member Drita D’Avanzo about the struggles she and her family endured growing up with her father behind bars.

“The lifestyle shouldn’t be idolized,” Fogarty said in an interview with TheWrap. “As you see my relationship with my father play out, you’ll see that no, it destroys families, it destroys relationships, and it’s something that my family still has problems with 20 years later.”

In the interview Fogarty also talked about joining the show for Season 6, explained why her relationship with Marissa was doomed from the star and shot back at Renee for being a hypocrite.

Different in what way?
I was raised outside of this lifestyle, and my family was torn apart because of it. My father was in prison until I was 11 years old, so it’s not a lifestyle I idolize. I look at it as something that tears families apart and something that destroyed my family. And I feel like a lot of women on the show, they idolize the lifestyle and these men.

Did you watch the show before you were cast?
I’d only seen the first season.

Was it intimidating coming into this group of women?
No, because these are the types of people that I was raised around. My mom’s side is a very big Italian gamily, with 10 kids. So all of my aunts and uncles and family members have these strong, aggressive personalities. These kinds of hot-heated people. So I was used to that.

What about being on television and putting yourself out there? Did that intimidate you at all?
The only thing that was a little bit of a change for me was opening up about my family and my relationship with my father. I’m a pretty private person. Unless you’re family or one of my really good friends, I don’t go around talking about my relationship to my dad or anything like that. So I think that was probably the biggest change, and the hardest part of it for me.

We saw that Renee was pretty quick to judge you for things your father did. Is that something you encounter a lot?
No, it’s not. I feel like only a simple-minded person would judge me based on my parents’ actions. I don’t feel like, as the child, I should have to pay for my parents’ mistakes. And with Renee, I feel like it’s extremely hypocritical. She doesn’t want people to treat her son that way, but that’s how she treats people who are in his position.

Do you think that’s why you connected with Drita?
Absolutely. She’s real down to earth. She’ll judge me based off of me, based off of who I am. I never felt like she was forming an opinion of me based on my parents and what they had done. And a lot of the other women, they have a certain attitude about them. They demand respect and they demand this and that. It’s almost like a controlling thing, a superiority thing. And Drita never acted like that. She treated me like an equal, like a friend from the very beginning. And I can’t say that about a lot of the other women.

You and Marissa really got into it over her calling you a “lush.” Why was that so offensive to you?
It wasn’t even the word that offended me. It was the fact that I felt like, “Why are you trying to start with me? Why are you trying to provoke me?” Watching the episode, it made a little more sense to me. Because from what I saw in her first scene, Renee was already putting things in her mind about me, and she hadn’t even met me yet. When we were sitting at the pool, you called me a lush, whatever. You know I don’t like it, but after that it was just an antagonistic thing.

Do you think you guys can get past that?
I’m not ever going to want to be around people who I feel like are looking to start with me for no reason.

Now that the show’s airing, do you look back and wish you’d done anything differently?
No. I don’t regret anything that came out of my mouth. I think if anything … I’m like, “Why was I trying to be nice to this person? Why did I even give them the benefit of the doubt?”

What do you want people to take away from your appearance on the show?
I think as the season goes on, you’ll see more of my personal life, my relationship with my father and everything like that. And I think what I would like people to take away from my addition to the show is that this isn’t something that should be idolized. That the lifestyle shouldn’t be idolized. As you see my relationship with my father play out, you’ll see that no, it destroys families, it destroys relationships, and it’s something that my family still has problems with 20 years later … Separate and apart from the drama and the bulls–t that goes on between the women, I would like people to see what really happens.