Prince’s estate is opening the vault on some of the late artist’s previously unreleased music this July. The album, titled “Welcome 2 America,” contains 12 brand new tracks that were recorded at Prince’s Paisley Park Studios in 2010.

This won’t be the first release of Prince music since the artist passed, with his estate having re-released versions of “1999” and “Sign o’ the Times.” However, it will be the first bout of new music released from Prince post-humously. In its announcement, the estate said the album is a reflection of “Prince’s concerns, hopes and visions for a shifting society, presciently foreshadowing an era of political division, disinformation, and a renewed fight for racial justice.”

Prince himself even left behind a quote with the album, writing “The world is fraught with misin4mation. George Orwell’s vision of the future is here. We need 2 remain steadfast in faith in the trying times ahead.” 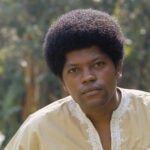 “Welcome 2 America” will be released by Legacy Recordings, a division of Sony Music Entertainment, which started releasing Prince music after a judge nullified a deal between the artist’s estate and Universal Music. And this album may not be the only new music we get from Prince going forward.

According to the New York Times, Prince’s vault at Paisley Park in Minneapolis is thought to contain hundreds — or perhaps thousands — of unreleased songs that Prince wrote and recorded before his accidental overdose in 2016. That said, no future releases have officially been announced.