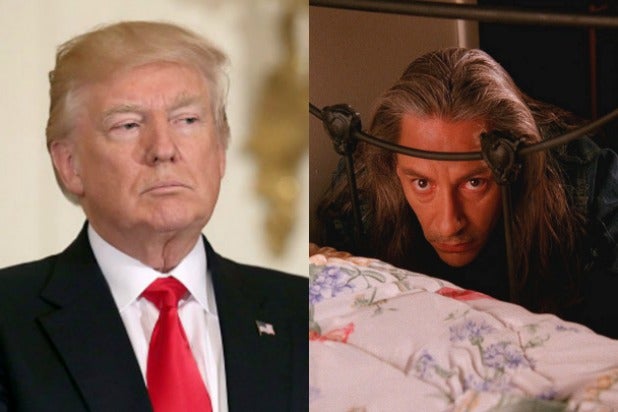 (We’ll keep the spoilers for “Twin Peaks: The Final Dssier” pretty light, but if you don’t wanna know anything you probably oughtta bail now.)

You might have thought the finale of Showtime’s “Twin Peaks” revival was the end of it, but that’s because you probably forgot that series co-creator Mark Frost had one more book in the pipeline. That book is “Twin Peaks: The Final Dossier,” a follow-up akin to his previous book “The Secret History of Twin Peaks” released a few years back.

Unless Frost and David Lynch decide they wanna do one more season (Showtime has indicated they’d be up for it), this will probably be the last hurrah of “Twin Peaks.” That being the case, Frost seemingly couldn’t help but slip in what feels like a dig at Donald Trump on the way out. Trump is not actually named in “The Final Dossier,” but the reference almost certainly is to him.

The book, like “The Secret History” before it, is presented as an in-universe report by a character putting together a file on all the weirdness related to Twin Peaks. This time, the character is FBI agent Tammy Preston (Chrysta Bell), a new character in the revival who worked closely with Agent Rosenfield (Miguel Ferrer) and deputy director Gordon Cole (Lynch).

The Trump reference appears when Tammy is recapping what kind of stuff Lana Budding Milford got into after her brand new husband Dougie Milford died — she was not one of the characters who returned for the revival series. Lana, you’ll recall, was a seductress, seemingly adept at bending any straight man to her will.

After Dougie died, Lana took her inheritance and went east to the Hamptons in New York, climbing the social ladder as you’d expect. Eventually, we get this nugget:

“On her way up the plutocratic food chain, Lana briefly dated a notorious resident of a certain eponymous tower on Fifth Avenue, who was either between wives, stepping out, or merely window-shopping. I was able to locate one society-page photograph of the duo at some charity gala, in which the man appears to be wearing an unusual green ring on his left ring finger, but the resolution of the shot proved insufficient for closer examination. In any case, their relationship was short-lived. As this was near the nadir of the man’s whizbang financial exploits–rife with bankruptcies, noxious litigations, and other related derring-do–one suspects that the ever resourceful Lana may have managed to finagle a peek at the man’s bottom line and decided she should chum neighboring waters for bigger fish. Gee, wonder what ever happened to that guy.”

Also Read: 'Twin Peaks' Finale: That Last Scene Gave Us a Major Callback and Clue About the World

The list of people who live in a tower that also bears their name on Fifth Avenue in Manhattan is not very long, so it’s hard to imagine who else Tammy might be referring to here other than Trump.

The fun part here is that Trump was wearing what sounds like the Owl Cave ring, which could have any number of ramifications for Trump — though it’s admittedly tough to draw any firm conclusions.

The thing about the ring is that its power is ambiguous beyond, as of the revival series, being a means to pull people into the Black Lodge. It definitely does do other things — it appears in strange places, seemingly doing nothing before disappearing and popping up somewhere else — but it’s not usually clear what the significance of its appearances are. And it’s not the first time the ring has been tied to Lana in some way. After Dougie Milford died, the ring was among his belongings but no one knows how it got there or if it did anything to Dougie.

Tammy’s investigation indicates that the ring, like the rest of Dougie’s possessions, would have been given to his widow Lana, but the ring was later seen on Annie’s (Heather Graham) finger when she returned from the Black Lodge. Trump wearing the ring in a photo with Lana is more likely to be a coincidence than to be Lana’s doing (Tammy also looks into whether Lana gave Dougie the ring but finds no evidence of such).

In any case, while it’s hard to draw any conclusions about what Trump’s possession of the ring means, we can speculate about what sort of sinister thing it could mean. There’s a few possibilities in particular that I’m interested in, more than one of which could be true simultaneously: that Trump went to the Black Lodge and came back possessed by BOB; that Lana is an agent of the Lodge who was trying to pull Trump into it; that Trump is actually be a product of the Black Lodge, i.e. a doppelganger like Dougie Jones or Evil Cooper.

Unfortunately, there’s no further reference to Trump in “The Final Dossier,” and the material on Lana is so light that it remains impossible to really know what her deal it. Likely, this was intended by Frost to just be an amusing joke at Trump’s expense (it’s not usually good guys who are associated with the ring) that makes you ponder the implications before you give up after a minute because there’s just not enough information to speculate without going deep down a rabbit hole. Especially since we don’t know if the Trump of the “Twin Peaks” universe parallels ours and we may have to delve into some alternate universe stuff. Let’s not do that today.