Nominees for the 45th annual National Magazine Awards – a.k.a the Ellies, the magazine industry equivalent of the Oscars – were announced on Wednesday.

As usual, New York’s pair of highly-regarded magazines – New York and the New Yorker – led the field with 10 nominations. National Geographic had seven. Esquire, GQ and Wired each had six, followed by the New York Times magazine and Texas Monthly with five.

When you include the accompanying digital nominations, New York magazine leads all titles with a combined 14.

But as the American Society of Magazine Editors – the “Academy” of magazines – is quick to point out, there were eight first-time nominees among the 51 magazines nominated.

The freaky Ellies trophies [pictured] will be doled out at a ceremony in New York on April 22.

Also planned that night, Anna Wintour will be inducted into the Magazine Editors’ Hall of Fame, and ASME executive director Marlene Kahan – who was diagnosed with Parkinson’s in 2003 – will be honored before she steps down after 30 years there. 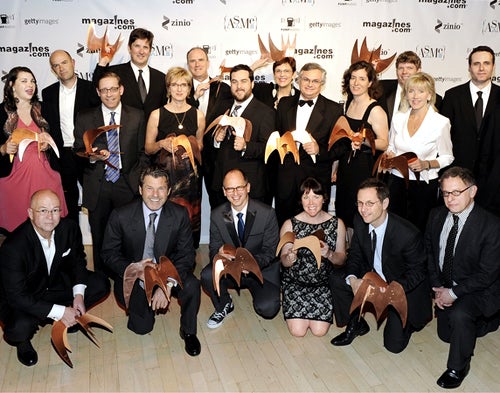 Honors the effectiveness of design, typography and artwork in support of the editorial mission of the magazine

Honors the effectiveness of photography, photojournalism and photo-illustration in support of the editorial mission of the magazine

Recognizes the informative photographic documentation of an event or subject

Recognizes the excellence of a regular, cohesive front- or back-of-back section

Honors the enterprise, skill and analysis that a magazine exhibits in covering an event or problem of contemporary interest and significance

Honors the knowledge, persuasiveness and original voice that the critic brings to her or his reviews

MAGAZINE OF THE YEAR