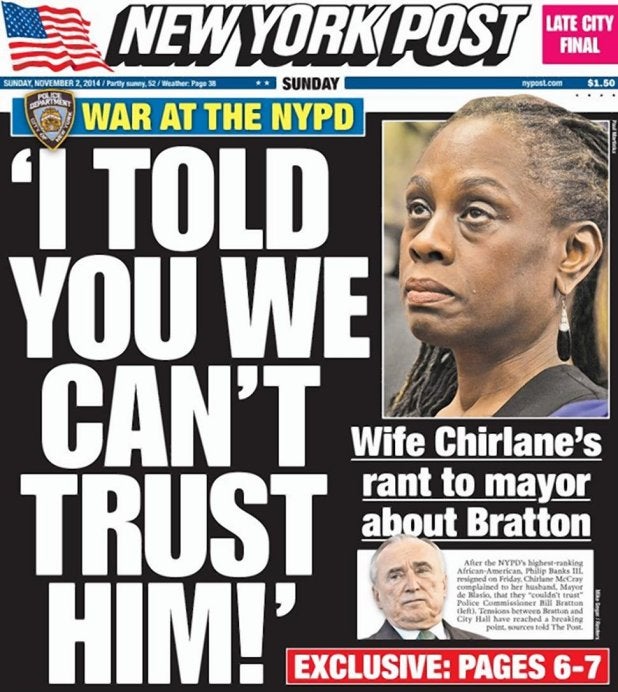 Chirlane McCray, the First Lady of New York City, took to the pages of the New York Daily News to pen an op-ed response to Sunday’s front page headline story about her in the New York Post, which she claims is filled with lies.

“This morning I woke up to a front-page news article that simply wasn’t true,” she wrote. “And it wasn’t the first time.”

She said it felt as if the reporters had created a fictional character that shared her name. “They put words into my mouth that I never said,” she wrote. “They gave me opinions that have never crossed my mind. They made it sound like NYPD Commissioner Bill Bratton is my sworn enemy, when in fact he has my full support.”

On the cover of the Sunday New York Post, McCray’s picture is posted next to the quote, “I told you we can’t trust him!” The story goes on to quote a source who said “she was very upset when he resigned,” referring to outgoing NYPD chief of department Philip Banks III.

While there are no additional quotes attributed to McCray in the story as it is posted online late Sunday night, she is mentioned sporadically in the article. Aside from the quote about her being “upset” over Banks’ resignation, she is later said to be angry about it, along with Mayor Bill de Blasio.

Only McCray indicates she never said those words. Instead, she said that it was people opposed to her husband’s efforts “to create a more fair and equal policing system” that are “spreading lies to irresponsible reporters.”

McCray then went on to detail her admiration and support for Commissioner Bratton, saying that “the only effective defense against lies is the truth.”

Again she posed the question, “How do these lies make it through the editorial process and end up in a major newspaper? How do opinions leak out of the ‘Editorials’ section and onto the front page?”

McCray hinted at a possible racial element, though she did not say it directly.

“Too many city newsrooms do not reflect the population of New York City or the experiences of the majority of New Yorkers,” she wrote. “We must demand newsrooms that are as diverse as the city they serve. And we must demand stories that are works of fact, not fiction.”