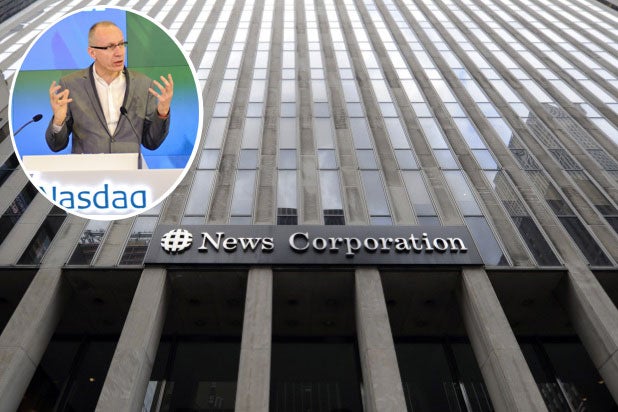 “Large companies are spending some of their money [on] too many meaningless placements on frivolous sites,” Chief Executive Robert Thomson said in response to the drop in revenue at the newspaper, noting that News Corp. ad sales teams have been tasked to approach buyers and “articulate the virtues of our platform as opposed to something that’s cyber-superficial.”

Thomson fielded tough questions on lower-than-expected $2.06 billion in revenue reported for the fiscal third quarter, following its earnings release at the close of U.S. stock markets on Tuesday. The company reported adjusted earnings of 5 cents per share, missing most forecasts there as well.

“While the quarter faced some revenue challenges, particularly at News and Information Services, including currency headwinds, our adjusted EBITDA was relatively stable,” Thomson said in the earnings release, “underscoring the strength of our assets and the diversification of our revenue base. We believe the company is firmly on track and the signs are positive for year-over-year EBITDA growth in the fourth quarter.”

“There’s no doubt that there are short-term trends in place, but we’re seeing a recovery in product advertising,” Thomson said of splashy campaigns from Samsung for their new S6 and S6 Edge devices.

Wall Street analysts had forecast EPS of 7 cents on $2.26 billion in revenue, according to Reuters and Yahoo. Zacks’ most accurate per share figure was right on the nickel. Bloomberg had estimated a 7 cents EPS analyst average on anticipated revenue of $2.14 billion; therefore, by most accounts, the media company didn’t live up to the Street’s predictions.

For the comparable third quarter of 2014, News Corp. had reported EPS of 8 cents on $2.08 billion in revenue; clearly, the market correctly anticipated earnings to be down in Q3 year-over-year.

Adjusted revenues declined 2 percent compared to Q3 2014. The company said most of the revenue decline reflects foreign currency fluctuations and lower advertising revenues at the News and Information Services segment. Losses were offset in large part by growth in the Book Publishing and Digital Real Estate Services segments as a result of the acquisition of Harlequin Enterprises Limited and Move, Inc., respectively, the company reported.

“The new News Corp. continues to build a firm foundation for digital growth. We see that most clearly in the successful integration of realtor.com, which grew audience and revenue at record levels in the third quarter. News Corp. is now a global leader in digital real estate, which we believe will underpin long-term expansion and complement our expertise in news and financial analysis, both of which have been important ingredients in realtor.com’s accelerated growth,” Thomson said.

In the News Corp. call for investors and reporters following the earnings announcement, Thomson noted that he had read the manuscript for upcoming HarperCollins release “Go Set a Watchman” from Harper Lee, author of Pulitzer Prize-winning classic “To Kill a Mockingbird.” The News Corp. chief executive said he anticipates the novel, set for July 14 release, will have “a profound impact.”