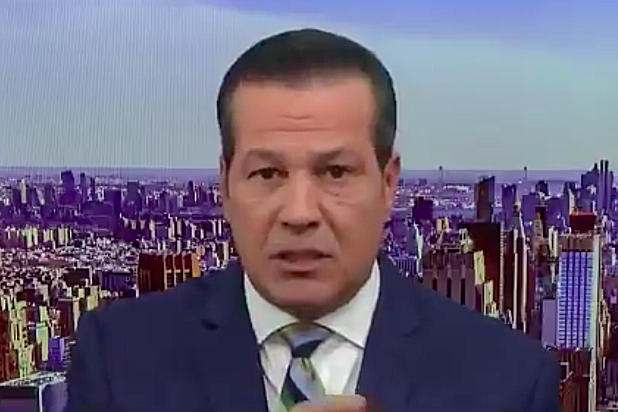 The walk-back comes after Smartmatic sent a letter to Newsmax, One America News Network and Fox News threatening a lawsuit over on-air claims that the company is linked to the voter fraud that outgoing president Donald Trump has baselessly insisted took place during the 2020 election.

Tabacco said in the statement that “various guests, elected officials and attorneys” have made the claims on air, but the network hasn’t actually reported them. A Newsmax spokesperson confirmed to TheWrap that the statement has run more than once and is expected to air on subsequent programs.

He further noted that “neither Dominion nor Smartmatic has any relationship with George Soros,” the billionaire philanthropist, or late Venezuelan leader Hugo Chavez, both of whom have been at the center of many recent right-wing conspiracies.

On Friday, Fox Business Network ran a fact-checking segment on “Lou Dobbs Tonight” that was rebroadcasted on Fox News Channel’s “Justice with Judge Jeanine” and “Sunday Morning Futures” through the weekend. Reached for comment, a Fox News spokesperson pointed TheWrap to the fact-check and did not elaborate beyond it.

A representative for OANN did not immediately return a request for comment on what that network has planned, if anything.

Smartmatic announced last Monday that it expects retractions from Fox News, Newsmax and OANN for their coverage of the voter fraud claims as it relates to the company.

The company said Monday it was sending out legal notices and demand letters that “identify dozens of factually inaccurate statements made by each of the organizations as part of a ‘disinformation campaign’ to injure Smartmatic and discredit the 2020 U.S. election.”

A Newsmax spokesperson previously told TheWrap something similar to the statement Tabacco read, saying the network itself “never made a claim of impropriety about Smartmatic, its ownership or software.”

The previous Newsmax statement went on, “As any major media outlet, we provide a forum for public concerns and discussion. In the past we have welcomed Smartmatic and its representatives to counter such claims they believe to be inaccurate and will continue to do so.”

Trump and his allies have insisted since the election that there was widespread voter fraud. Trump has not yet conceded the race to President-elect Joe Biden, even after dozens of lawsuits brought by the president’s legal team were smacked down in federal and state courts. Earlier this month, the U.S. Supreme Court even opted to not hear the state of Texas’s attempt to overturn Biden’s victories in key swing states, effectively shutting the door on Trump’s efforts to upend the vote before the the Electoral College met to finalize the election last week.

Newsmax just aired this note to "clarify" its coverage of Smartmatic and Dominion. pic.twitter.com/I5XZ7CQpAk