We may never know what the original plan for "Justice League" was. The movie obviously underwent some major changes during its production, specifically when directing duties were handed off from Zack Snyder to Joss Whedon. But elements that made their way into the finished film seem to hint at what could have been.

We know a lot was added or changed in reshoots, particularly those that included Superman actor Henry Cavill and the CGI treatment used to airbrush off a mustache he'd grown for another role. There are also clues throughout the movie of story threads that seem like they were once a bigger deal -- like when villain Steppenwolf mentions Darkseid, a much spookier adversary in the DC Comics world.

Steppenwolf's Darkseid line (literally just "For Darkseid") suggests this movie was setting up the greater threat, but in the final version of "Justice League," Darkseid gets exactly one mention and no elaboration. Meanwhile, the movie's post-credits scene suggests it's Lex Luthor who will next threaten the heroes.

Another big hint at the "Justice League" plot that might have been is an early shot of a newspaper with some altogether bizarre and scary headlines. During the montage that shows how bad the world has gotten after the death of Superman in "Batman v. Superman," the camera lingers on a front page that suggests a few things that "Justice League" never again mentions, but seemingly might have. 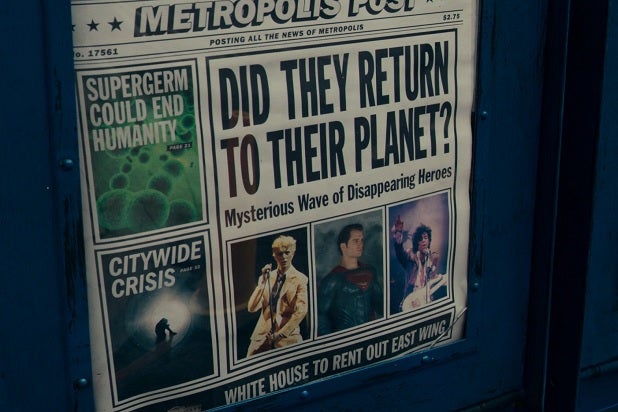 The newspaper is dominated by a somewhat-joking story featuring photos of Prince, David Bowie and Superman, asking, "Did they return to their home planet?" But other stories on the page suggest some really scary developments.

The most notable part of the newspaper is that it repeatedly references disease. The headline next to the photo showing Superman mentions a "super-germ" that could "wipe out humanity."

Some kind of plague is mentioned half-heartedly in the background at another point in "Justice League," but the idea is never expounded upon. The idea that a plague might have been part of the story at some point seems possible. It's also backed up by another headline on the paper, noting an increase in mysterious birth defects. Yet another headline mentions something "waging war on humanity."

The Metropolis Post in this case seems to be mirroring the tabloid New York Post, and so it might be that this newspaper is more joke than clue. Another headline toward the bottom of the paper states the White House is preparing to rent out is East Wing. Outwardly, the idea that the U.S. might be in such dire financial straits that it needs to rent out part of the White House seems pretty ridiculous.

Then again, the world of "Justice League" is a mess without Superman, and maybe these headlines do give some idea of what that world is like, or what elements might have become important in an earlier draft of the script. After all, "Justice League" sees the Earth attacked by aliens from another world, so really, none of this stuff is that much of a stretch.

We know "Justice League" was originally planned as two movies, so what we're seeing on the Metropolis Post might be a hint at how Darkseid and Steppenwolf were aiming to destroy the world -- through some kind of alien plague. That wouldn't be too far out of step with the wasteland-like vision Batman had back in "Batman v. Superman," really. Add a pandemic to a bunch of parademons and a possibly evil, resurrected Superman, and that image sounds a lot like what Batman foresaw.

Of course, the storyline hinted at in "Batman v. Superman" in which Superman went evil was abandoned in "Justice League," or at the very least, postponed. Just because Superman is back and seemingly in okay shape at the end of "Justice League," though, doesn't mean aliens are done attacking Earth -- or that the weird "super-germ" might not still be threatening humanity in the future.