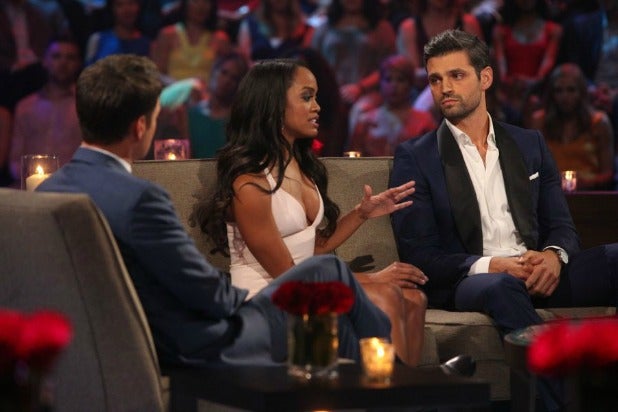 Chris Harrison, Rachel Lindsay and Peter Kraus on "The Bachelorette"

It appears that Peter Kraus, Rachel Lindsay’s runner-up on “The Bachelorette” Season 13, won’t get a second shot at TV-endorsed romance anytime soon.

“The Bachelor” creator Mike Fleiss tweeted a message on Thursday that did not mention Kraus by name but appeared to be a clear sign that the show’s producers are not considering him as its lead for Season 22.

“Do we really want a Bachelor who isn’t ready to settle down with a woman he loves?” Fleiss wrote. “Hmmm. Not what #thebachelor is all about…”

This prompted blogger Reality Steve, known for posting “Bachelor” franchise spoilers, to tweet that producers did in fact want Kraus as the next season’s lead but that Kraus declined the offer.

“The Bachelorette” viewers were stunned during Lindsay’s finale on ABC earlier this month when Kraus told Lindsay that he was in love with her but would not be ready to propose by the end of the season, leading the two to part ways. Lindsay ended up getting engaged on the show to Bryan Abasolo.

Lindsay herself made her opinion clear on whether Kraus should be the next Bachelor when she told him multiple times during their post-finale conversation that the franchise is “not for you.”

Other potential candidates to be the next Bachelor include “Bachelorette” Season 13 standouts Eric Bigger and Dean Unglert, along with such franchise alums as Ben Higgins and Wells Adams.

ABC and Warner Bros. declined to comment for this story.

Do we really want a Bachelor who isn't ready to settle down with a woman he loves? Hmmm. Not what #thebachelor is all about…

“Bachelor in Paradise” airs Mondays and Tuesdays at 8 p.m. ET on ABC.