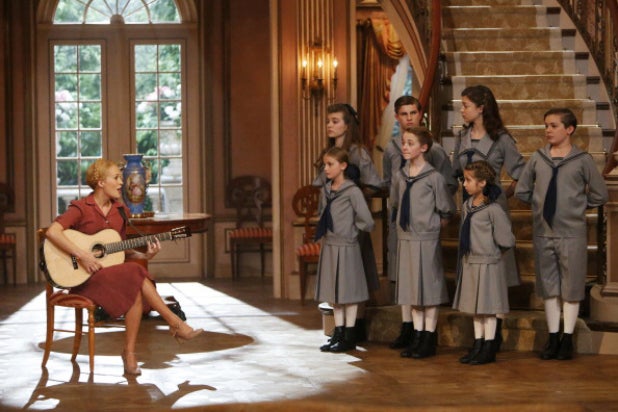 “The Sound of Music Live” was a massive ratings hit for NBC on Thursday, but it drew very strong and mixed reaction from viewers and critics alike.

While there is no official measurement (that TheWrap is aware of) for hate-watching and Twitter-bashing, we’re fairly certain the Carrie Underwood-led musical may have shattered an unofficial “Sharknado” record on the unintentional TV comedy scale.

In that spirit, TheWrap complied a list of 10 other musicals that we want NBC to produce, along with casting suggestions, so we can continue the hate-watching far into the future:

“Wicked” starring Nicki Minaj and Mariah Carey
Not only is this suggestion already aptly titled, but it could legitimately result in a live fistfight on air. The former “American Idol” feud could spill over into must-see TV realm with these two loose cannons. (One who is legitimately a “Cannon” by marriage.)

There would honestly only be one problem with this casting — they can’t both play the Wicked Witch. Someone has to be good. Guess that’s you by default, Nicki.

“Wonderful Town” starring Lady Gaga and Kenan Thompson (in drag)
The musical follows the story of sisters Ruth and Eileen Sherwood, who travel to New York City looking for love. So why cast Gaga and Thompson? Well why not, the pop star is pretty desperate following her “ARTPOP” flop, can carry a tune live, and can even act a bit as she proved recently on Thompson’s “Saturday Night Live.”

But it’s also an invitation for her hyper-protective “Monsters” to over-defensively lose their minds on Twitter. And Thompson? Well we just like to see him in a dress. And he has some singing experience, what with “SNL’s” wildly played-out “What’s Up With That?” sketch.

“Cats” starring Grumpy Cat and Lil’ Bub
Now this one makes plenty of sense, you know, because they’re cats. There’s just one small problem. Well, two small problems really — the kitties themselves. Adorable, yes, but they don’t speak any human English (that we know of) and are not accomplished singers. Plus, Grumpy Cat is kind of a dick and Lil’ Bub looks like he couldn’t remember a line to save one of his nine lives. But it’d be a cute attempt, sponsored commercial-free by Friskies.

“Oklahoma” with Oklahoma’s own Carrie Underwood and Brad Paisley
Let’s give Thursday’s star a second chance with material that — geographically at least — inherently suits the former “American Idol” songstress. Plus, the numbers from “The Sound of Music Live” back this suggestion up: Among metered markets, the telecast had the highest tune-in numbers in Oklahoma City, the capital of the titular state.

“South Pacific” starring Kanye West
Or really, just anything with Kanye West in it at this point would be magical. Plus, Yeezus will stand up for himself hard on social media when the hate-watching turns into Twitter-bashing.

Although if this suggestion could be a one-off for over on ABC, we’d be eternally grateful for the promotional Kanye-Kimmel Round 2. We’ll even let Mr. West design the sets and costumes — leather jogging pants for all! For what it’s worth, the male lead in the musical also has biracial children, which was a bigger deal in 1949. Bring on the North West acting debut.

Oh, this would be the best. And by “the best,” we of course mean the absolute worst. Can’t you envision Khloe as Effie, the, err, full-figured one, who gets replaced by the attention-stealing Kim? Art imitating life, indeed.

As for Kourtney, she could just sit around doing nothing on-screen, which is pretty much exactly what they’ve made careers out of.

Here’s a non-Kardashian-related fun nugget: The “Dreamgirls” Wikipedia page actually says, “Not to be confused with ‘Showgirls.‘” With this cast though, it might be.

“Oliver!” starring Justin Bieber
Please make this one happen, NBC. The Biebs could use a wholesome image rehab project at the moment, so why not have him portray an adorable orphan-turned-pickpocket? Although the onscreen rebellion may not be exactly what the public relations doctor ordered, it sure would be a hoot to watch.

And if you hook up BFF Lil’ Twist with a supporting role, you might actually get the “Boyfriend” singer for the project. As for his on-stage elderly mentor, any aging former teen sensation would do — the more bitter the better. No lack of options there. Or we can just go with Usher. Yeah, cast him instead.

“Cabaret” starring Gwyneth Paltrow
People love to hate Gwyneth Paltrow anyway, so there’s half the battle in setting the Twittersphere ablaze with snark. Paltrow in this role would essentially perform as a less-accomplished-but-just-as-despised Anne Hathaway, who ironically the real Family Von Trapp actually wanted in Carrie Underwood’s role.

But Paltrow can sing a little bit, as she proved more recently in Fox’s “Glee” and previously in 2000’s “Duets,” opposite Huey Lewis — so this could legitimately work. Though we’d never subject the great Lewis (or his News) to play opposite Pepper Potts in this fantasy adaptation.

“Funny Girl” starring Susan Boyle
Well, we know the singing would be good at least. But we’ll leave the wardrobe to the experts.

Boyle’s done a very limited amount of acting, and though the Rick Santorum-produced “The Christmas Candle” in which she stars as Eleanor flamed out in theaters, we think she deserves another shot. After all she won hearts on the small screen, and it’s a good soundtrack opportunity here.