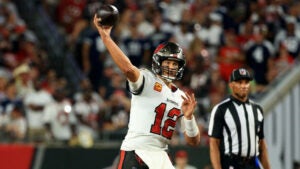 How the NFL Has Bucked Recent Ratings Trends | Chart

Tom Brady’s still got it

NBC couldn’t have asked for a better way to kick off the 2021 NFL season than Thurday night’s game between the Dallas Cowboys, “America’s Team,” and the defending Super Bowl champions, the Tampa Bay Buccaneers.

Piloted by the Tom Brady, widely considered the greatest quarterback of all time, the Bucs came back to beat the ‘Boys 31-29 while at home in Tampa Bay, Florida’s Raymond James Stadium. Yes, there were plenty of reasons to fire off that giant pirate ship’s many cannons.

The broadcast drew in 24.4 million viewers on NBC, making it the most-watched show on linear TV since the Super Bowl in February. When including viewers on Peacock, NBC Sports Digital and NFL Digital platforms, the 2021 Kickoff Game drew a total of 26.0 million viewers, a 20% year-over-year increase.

In fact, Thursday’s game ranks as the most-watched NFL Kickoff Game since the New England Patriots hosted the Pittsburgh Steelers in 2015. (That broadcast was watched by a total of 27.4 million viewers and led in to the most-watched season in “Sunday Night Football” history.)

The 1.6 million viewers across digital platforms is the best showing of any NFL game outside of Super Bowls. Compared to last year’s total of 970,000 streaming viewers, the 2021 season opener was up 64%.