The series is about a couple (played by Cristin Milioti and William Jackson Harper), who investigate an unsolved mystery from 15 years ago while celebrating their anniversary on Mexico’s Mayan Riviera.

Offerman will play Murray Thompson, the father of Nina Bloomgarden’s character Violet, and the two begin the series on a vacation together with Murray’s girlfriend. 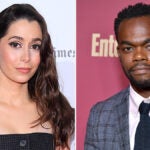 The logline for the show is as follows: “A multi-generational, coming-of-age love story disguised as a fast-paced mystery about the disappointment of time. An anniversary trip puts a marriage to the test when the couple finds themselves embroiled in one of the Mayan Riviera’s most bizarre unsolved mysteries that took place 15 years prior.”

“The Resort” is produced by UCP, a division of Universal Studio Group. Showrunner Andy Siara will write and executive produce. Esmail, via his overall deal with UCP, and Chad Hamilton, via Anonymous Content, serve as executive producers. Allison Miller is also an EP. Sarah Matte of Esmail Corp serves as co-executive producer.