IATSE Local 839, better known as The Animation Guild, announced on Monday that a super majority of production workers at Nickelodeon has voted to unionize with the labor organization.

In a statement, TAG stated its belief that the bargaining unit should be included under the existing collective bargaining agreement with Nickelodeon that covers over 400 other animation workers, including CG technicians, storyboard artists, character designers and writers. The production workers have organized to bridge the gap in pay disparity between them and their unionized co-workers as well as to demand better benefits. 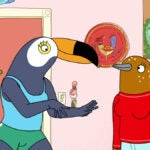 “The current pay gap for production roles makes it near impossible to survive in Los Angeles. Many
of us have taken the shame of asking our parents for money so we can pay rent and eat,” production coordinator Ryan Brodsky said in a statement. “We’re working full time for one of the largest corporations on earth and there’s no reason that our parents should be funding this multi-billion dollar
corporation.”

The Guild said Nickelodeon has not responded to requests for voluntary recognition of the new unit and that attorneys for the company have sought to separate the production workers from that main bargaining unit based on their job titles.

“The company shared its preference to keep the productive working relationship a priority when discussing the impending negotiations for the existing bargaining unit,” Animation Guild Business Representative Steve Kaplan said. “It is therefore a surprise and shame that the company is choosing to put that relationship in jeopardy by forcing us to go to the NLRB and possibly take escalating action to achieve our goal of the inclusion of the production staff.”

In a statement, a spokesperson for Nickelodeon said that the company “has been collaboratively working with the Animation Guild regarding a path forward for this group of employees, and we expect our long-standing, positive relationship with the Guild to continue.”