After a small hiccup of not having her phone — which had her typed-out speech — on stage, Minaj read off what she wrote about her opportunities, collaborators and more.

“Let me tell you something,” she began after performing a medley of her hits. “I don’t want to miss out rolling the music on me but I never ever in my life have written a speech, and today I jotted something down on my phone, and I gave it — I gave my phone to Joe and he’s not up here with it. Which is sad because now I don’t remember stuff.” 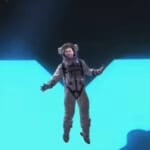 “I wanna take a second to say thank you to all the key people that inspired me and who I think inspired my flow: Lil’ Wayne, Foxy Brown, Lauryn Hill, Jay-Z, Dougie Fresh,” she continued. “And then I wrote ‘People who gave me huge opportunities that I’ll never forget: Kanye West, Beyoncé, Madonna, Mariah Carey, Eminem, Britney Spears, Rihanna. […] Of course you guys I have to thank Drizzy for always saying the things that I need to hear to get me back into it.”

Minaj eventually received her phone, which contained her full speech, in which she mentioned Jackson and Houston.

“I wish that Whitney Houston and Michael Jackson were here,” she said. “I wish that people understood what they were going through. I wish people took mental health seriously, even for the people who you think have a perfect lives.” 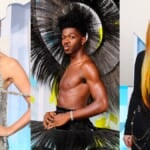 “I wish Pop Smoke and Juice WRLD were here,” Minaj continued. “R.I.P. daddy, my cousin Richard and my business manager Angela who I never got to say rest in piece to publicly.”

The “Super Bass” performer then listed highlights of her career.

“To all the artists, producers and writers who contributed to any of my projects,” she added. “Also to all the people who allow me to feature on their work, thank you. I’ve featured on so many people’s music and albums, and I want you to know that I appreciate each and every one of you. I don’t take that for granted.”

Watch her entire speech in the video at the top.