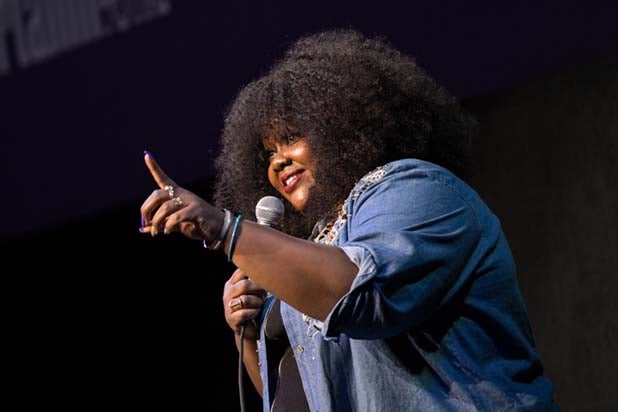 “Nailed It!” is a unique breed in the world of reality competition shows, walking the fine line between genuine contest and tongue-in-cheek sendup of the entire genre. Most of the time, that unique sensibility seems to stem from its host, the actress and comedian Nicole Byer.

From her breakout as a regular commentator on MTV’s “Girl Code,” to her scripted MTV-turned-Facebook Watch series “Loosely Exactly Nicole,” much of Byer’s comedy is embodied by that same flavor of sharp, but always good-natured, ribbing.

On “Nailed It!,” the Netflix baking competition where amateur bakers attempt to recreate elaborate professional treats to comically poor results, Byer’s keen stewardship keeps the show from veering into territory that’s too mean or sad to be entertaining. And it’s what seems to have resonated with fans, who have taken to the show in droves.

“I didn’t even know if it was gonna be funny,” Byer said in an interview with TheWrap. “They didn’t really give me any indication about the direction it was gonna go, and I don’t think they knew where it was gonna go until they got into the edit. So, I had no clue [it would be so popular]. It’s wild.”

The joyful spirit of the show bears a kinship to another hugely popular Netflix reality series, the streamer’s recent “Queer Eye” reboot. Smartly capitalizing on the growing audience for the two shows, Netflix released a crossover episode on Friday, the same day the second season of “Nailed It!” was made available to stream.

Watch the crossover and read TheWrap’s full interview with Byer below.

TheWrap: What was it like shooting that episode with the “Queer Eye” cast?

Byer: It was so fun! I know Jonathan Van Ness from comedy, and he’s got this wonderful show on Funny or Die called “Gay of Thrones.” I hadn’t met the other “Queer Eye” boys before, but they were all so sweet and kind. Just honestly a joy to be around, so shooting it was super fun. It was a little hectic because it is five big personalities, and then I am a sixth gigantic personality, but I think it came together well. And I think it showed that we had a lot of fun.

I saw a few people joking that Antoni sitting out of the challenge was a conspiracy by Netflix to hide the fact that he can’t actually cook.

[Laughs] Oh no, I’m not commenting at all on that. I love my paychecks.

These shows seemed to have a similar kind of overnight success that nobody really saw coming. When you were shooting the episodes did you have any idea that it would resonate with viewers?

No, I had no idea. I didn’t even know if it was gonna be funny. We shoot for like 10 hours a day; it’s a long day. And they didn’t really give me any indication about the direction it was gonna go, and I don’t think they knew where it was gonna go until they got into the edit. So, I had no clue. It’s wild. My comedy friends have said that they liked it so much, and comedy people don’t really give out compliments unless you deserve it.

Also Read: Netflix in July: What's Coming and What to Watch Before It's Gone (Photos)

Does that change how you approach the show going forward? Will you do anything differently?

You kind of walk a fine line, playing both host and judge, where you’re providing support for the contestants while also making jokes about their failures. How do you view your role on the show?

Well my job is to not make anybody feel like s—. My job is to keep it moving, and to let them know what I see with my eyes. But these people have never done this before. It’s like, if I went to an open mic and someone did five minutes of material for the first time, you can’t shit on that. It’s the first time they’re doing it. So what you do is like, ‘Here’s a good tag for you, here’s why your tag didn’t work.’ So Jacques giving his critiques isn’t out of meanness. The man is very, very skilled and knows his s—. He’s not saying it to be mean, he’s saying it to help you. So yeah you just have to find that happy medium of like, Is it funny to say this to someone who’s tearful? Probably not.

The show is set up in a way where the contestants are very much in on the joke and there aren’t really any bad feelings. Do you do anything specific to cultivate that energy in the room?

I’m just very much myself, and I try to do what I can. I’m generally a positive person. My mom used to say that it takes more energy to frown than to smile, and I try to carry that energy with me. My mom was a really positive, jovial person, so I try to keep it upbeat like that.

Do you have a favorite cake from the show?

I really liked those barbecue cakes. They were really funny, just wild to look at. And those unicorn cakes! Truly they were soup.

You also just recently finished the second season of “Loosely Exactly Nicole” on Facebook Watch. As far as you know, are there plans to do a third season?

You were on the last season of “RuPaul’s Drag Race” as a guest judge. Are you a fan of the show?

I’m an OG fan. I’ve seen every season about three times. Violet Chachki on her season was like, “I used to sleep with a Vogue magazine.” This show was my Vogue magazine. When I found this show, I was like, These people are like me. They put wigs on their heads and giant eyelashes, and a funny lip sync is much like a comedy routine. I would say I have more in common with drag queens than I do with most people.

What did you think of the finale?

I thought Aquaria did a fantastic job. She was captivating, she was great. Eureka was also great, and Kameron really is a lip sync assassin. That’s an apt name for her. I wanted Asia to win, but when that first butterfly didn’t take flight, to me as an improviser, that’s when you abandon it. Just abandon it. I think she could’ve won that lip sync had she just abandoned the plan.

That was really something.

It was tough. When she opened that first titty I was like, Girl, cover it up! Then she went for the second titty, and I was like, Asia, no! Truly screaming at my television. I knew it was happening too, because I had a friend at the finale. He told me, but I was like, No, it can’t be. They have to let her redo it. [Laughs] But Asia O’Hara still goes down as one of my favorite queens.