Birthday cake pro tip: Make sure the candles closest to you are extinguished before you lean over to blow out the rest. That’s something Nicole Richie had to learn the hard way this week.

Celebrating her 40th birthday Tuesday night, Richie had a small sheet cake with what appears to be a photo of her childhood self on it. There weren’t quite 40 candles on it, but it only took two candles for the mishap to occur. As Richie made her wish, she leaned over to blow out the candles at the top of the cake, apparently not realizing that the two corner candles at the bottom were still lit.

Unfortunately, those candles set the ends of Richie’s hair on fire, which you can see in the slightly terrifying video below. 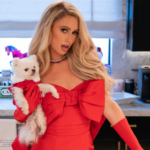 “Well, so far 40 is ?,” Richie cleverly captioned the clip on Instagram, which racked up nearly 2 million views in just over 12 hours.

Based on the footage, it doesn’t appear Richie was seriously hurt, just a little shaken up by the situation. In the meantime, her loved ones had jokes ready to go in the comments section.