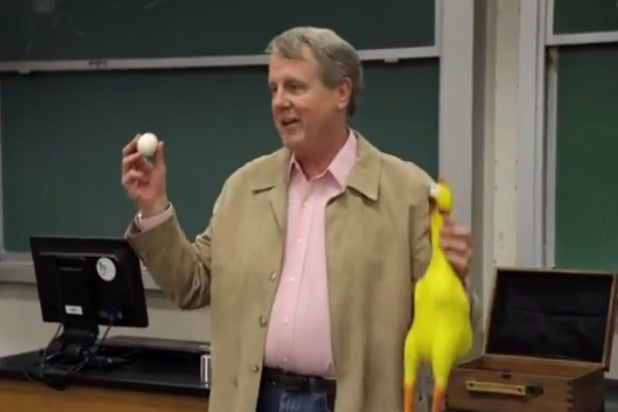 “Night Court” judge Harry Anderson brings his rubber chicken to college in a new feature film about the dangers of failing to teach creationism alongside evolution.

You may have forgotten Anderson’s role as judge and part-time magician Harry Stone on NBC’s very funny “Night Court,” which ran from 1984 to 1992. If you do remember Judge Stone, you’ve almost definitely forgotten that he sometimes talked to a rubber chicken.

But look who remembered: The creationist creators of “A Matter of Faith,” coming to theaters Sept. 26. They’ve cast Anderson as a biology professor who uses a rubber chicken to explain the concept of evolution, while a bunch of creationists shout about the danger he poses as if he and Richard Dawkins were plotting to steal the nuclear codes.

Anderson and his chicken seem to make a good case for teaching evolution — it’s just impossible to hate this guy.

But even the thumpiest Bible thumpers may be intimidated by Jay Pickett’s vein-popping creationist dad, who demands that Anderson give equal time to the holy word of Jesus Christ, who as we all remember spent most of His time explaining how the devil planted dinosaur bones to trick us.