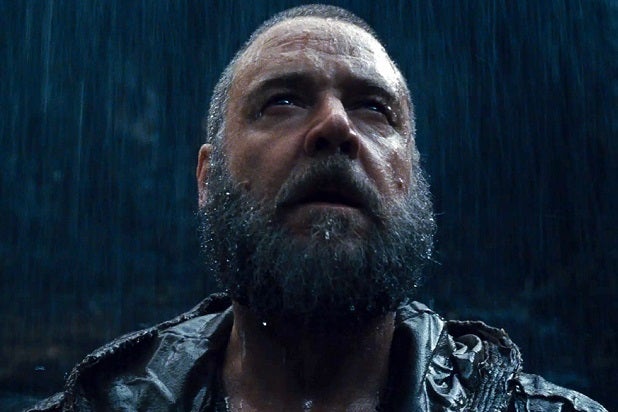 How the David vs. Goliath battle between the big-budget Biblical saga “Noah” and the surprise indie hit “God’s Not Dead” will pan out is just one of several intriguing questions to be answered at the box office this weekend.

How front-loaded will “Divergent” be? Can “The Grand Budapest Hotel” keep its momentum as it goes wide? Will Arnold Schwarzenegger‘s “Sabotage” break his post-politics losing streak? Will Hispanics turn out for “Cesar Chavez”? And can Justin Bateman’s R-rated dark comedy about a spelling bee crack the top ten?

Let’s get to the answers.

“Noah” is going to beat “God’s Not Dead”

So say the analysts, who believe Paramount and New Regency’s $125 million epic will take in around $35 million to finish No. 1 and knock “Divergent” out of the top spot. That’s not as strong an opening number as a studio wants to see for a film with that kind of budget, but it’s become clear that overseas will float “Noah’s” box-office boat.

Freestyle Releasing thinks that its faith-based drama “God’s Not Dead” — about a teen trying to convince his skeptical college prof that the Deity exists — has room to grow and is expanding it into more than 1,160 theaters for its second week. After its stunning $9 million debut last weekend — on just 780 screens — powered by a knockout social media campaign, it’s hard to bet against it.

Russell Crowe stars as the ark builder in the Darren Aronofsky-directed “Noah,” which is as much a special effects extravaganza as it is a Biblical saga. That will sell tickets, especially abroad where it will be released in 3D, but it has also drawn criticism from Christian groups disappointed that the film doesn’t adhere closely enough to Scripture.

Jennifer Connelly, Emma Watson, Logan Lerman and Anthony Hopkins co-star in “Noah,” which was written by Aronofsky and Ari Handel, who collaborated with the director on “The Fountain,” “The Wrestler” and “Black Swan.” It’s by far the biggest budget Aronofsky has worked with.

Some may find the director’s edgy style and the film’s environmental undertones polarizing, but that hasn’t hurt awareness of the PG-13-rated “Noah.” There’s been a ton of buzz.

Besides the is-it-Biblical-enough debate, Aronofsky has said he was blindsided by marketing changes made to appease Christians, it has been banned in a handful of Middle Eastern countries and the VFX company behind the water-effects filled-film has admitted that it has lost a bundle.

It hasn’t all been negative. The reviews have been strong, and it’s at 79 percent “fresh” on Rotten Tomatoes. It opened in Mexico and Korea last weekend and was a strong No. 1 in both markets.

The studio is less bullish than the analysts, and forecasts a $30 million-$33 million three-day total, pointing out that it lacks the advance sales of that Mark Burnett’s Biblical saga “Son of God” did prior to its $26.5 million debut last month. It’s counting on older moviegoers to deliver staying power over the next few weeks as Easter nears, but the trade-off is that they probably won’t rush out to see it on opening weekend.

This is a critical weekend for Lionsgate’s franchise-launching teen sci-fi adventure, and the key won’t just be expanding beyond its core audience of young women.

Exit polls showed that only 50 percent of the opening weekend crowd had read the Veronica Roth books upon which the film is based, a far smaller percentage of readers than turned out for “Twilight” (74 percent) and “The Hunger Games (75 percent). If “Divergent” can draw more people who’ve read the books while continuing to attract those who haven’t, it could hold around half the $56 million it opened with last weekend.

It’s played strongly on the weekdays ($3.5 million Monday, $4.1 million Tuesday) and spring break means more teenagers are on the loose. And it’s still the only movie out there aimed squarely at women, so here’s betting it will. It was leading advance sales at online ticket broker Movieticket.com on Wednesday.

Wes Anderson’s ensemble comedy has had the highest per-screen average of any film in release since it opened three weeks ago. It’s been steadily building on its record-breaking limited debut and is up to $13.6 million so far, and this weekend Fox Searchlight is jumping it to 975 theaters in 40 new markets.

Success in limited releases doesn’t always translate to the mainstream, but it will for the R-rated “Grand Budapest.”  It’s a comedy, Anderson’s fan base is growing after his 2012 hit “Moonrise Kingdom” and the cast is filled with familiar faces including Bill Murray, Edward Norton, Owen Wilson, Tilda Swinton, Jude Law, Jason Schwartzman, Willem Dafoe, Jeff Goldblum and Adrien Brody.

It finished seventh last weekend, with $3.6 million on just 304 screens, and will surely move up.

“Sabotage” is director David Ayer’s followup to “End of Watch,” the gritty police drama that was a surprise hit for the studio in 2012, taking in $41 million on a $7 million budget. “Sabotage” hasn’t been screened for critics so there aren’t any reviews yet, but it hasn’t connected on social media and the crowded marketplace isn’t going to help.

Malin Ackerman and Sam Worthington co-star in “Sabotage,” which was scripted by Ayer and Skip Woods.

Lionsgate’s Pantelion Films and Participant Media will have it in 664 theaters, or more than double the number in which last year’s Hispanic-targeting family comedy “Instructions Not Included” opened. That one, starring Mexican TV star Eugenio Derbez, went on to take in $85 million globally on a budget of $5 million and became the highest-grossing foreign language film ever in the U.S. with $41 million.

Hispanic audiences have been under-served for years, but they’re becoming increasingly important to the U.S. box office. If the PG-13-rated “Cesar Chavez” can tap into that core, and connect at least to a degree with a broader audience, it should be another hit for Pantelion. Spanish-dubbed and subtitled prints will be made available in all locations.

Justin Bateman’s directorial debut “Bad Words” gets its mainstream test this weekend, as Focus Features expands it from 87 theaters to more than 600. It should crack the top ten, but barely.

The edgy nature and subject matter of the film, in which Bateman stars as well, has divided critics and audiences likely will be split as well.

TheWrap’s critic Inkoo Kang wrote that the “tale of a miserable sonovabitch hell-bent on destroying a kids’ spelling bee shares with the tonally similar “Horrible Bosses” a misanthropic verve that exhilarates in the first act and grates by the third.”

That comedic mean streak — “Bad Words” is rife with insults toward women and children — could help it find a niche audience, but it’s hard to see it scoring broadly.