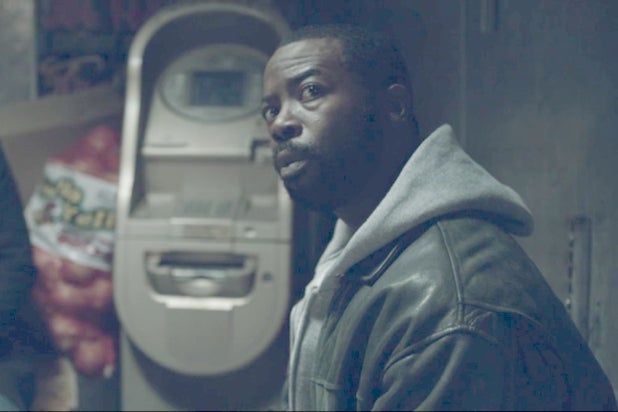 There’s a storytelling trope in which a person being interrogated, in the heat of the moment, makes up a name using whatever he sees in front of him — and it often involves coffee. In 1987’s “Hiding Out,” Jon Cryer adopts the name “Maxwell Hauser” after seeing some Maxwell House. In 1995’s “The Usual Suspects,” Kevin Spacey describes a scary character named Mr. Kobayashi after reading the name off the bottom of a cup.

In the fifth episode of HBO’s “The Night Of,” which ends Sunday, writer Richard Price drops a big clue about what kind of writer he is and what kind of story he’s telling — and it again involves someone giving a name under pressure.

Attorney John Stone (John Turturro) confronts Trevor (JD Williams) in a laundromat about who was with him on the night Andrea Cornish died. Trevor says it was a man named Duane Reade. Stone glances out the window across the street at a sign for the drugstore chain called Duane Reade. Stone reasonably deduces that Trevor has just pulled a Maxwell Hauser/Mr. Kobayashi, and calls him out on making up such an unimaginative name.

But in the next scene, there’s a surprise.

“Guess what?” Stone says. “His name really is Duane Reade.”

Stone has learned that Duane Reade is not only a real person, but a viable suspect in Andrea’s murder. Duane (Charlie Hudson III, pictured) has a rap sheet that includes breaking and entering, robbery and assault. He definitely sounds like someone who could have broken into Andrea’s (Sofia Black D’Elia) home, especially considering Duane’s stare-down with her and Naz (Riz Ahmed) in the first episode. Stone eventually tracks Duane down, and Duane, after answering to the name, makes a break for it.

What did Price tell us with the Duane Reade scenes? First, that he’s well aware of the make-up-a-name trope. And that he’s aware we’re aware. And that he’s going to subvert our expectations, even if it requires a ridiculous surprise: Guess what? His name really is Duane Reade. And Trevor really did give up his name while sitting across the street from a Duane Reade.

Also Read: The Evolution of Riz Ahmed, From 'The Night Of' to 'Rogue One'(Photos)

The twists might tell us a lot about how Price, a novelist whose onscreen work includes “Clockers” and “The Wire,” feels about his story. He’s determined to address our expectations in ways we don’t expect.

Unfortunately, that limits his options as he solves his whodunit. Was it the wicked stepdad? The hearse driver? Duane Reade? (We weigh the pros and cons of each suspect here.) One way Price could upend our expectations, of course, would be to not resolve this thing at all.

Price would be within his rights: “The Night Of” never told us it was a murder mystery — not in its ads, and not in its promotion. (One of the reasons the non-resolution of “The Killing” Season 1 was so disappointing to some viewers was that the AMC’s ad campaign had focused on the question, “Who Killed Rosie Larsen?” Asking the question suggested that we might actually get an answer. We finally did in the second season, but by then it was too late for some viewers.)

Whether or not Price answers the murder question, he joins a long line of writers who’ve used a killing as a plot device to investigate issues perhaps even more important than a single murder — issues like whether our criminal justice system is inherently corrupt. He’s already shown us how a relatively short time at Riker’s Island has turned Naz, who is probably innocent of Andrea’s murder, into a real criminal.

Of course, Sunday’s finale should also tell us whether Naz will be found guilty in the eyes of the law. That’s enough story for one story, whether we find out who the real killer is or not.

But if Price really wants to subvert our expectations, maybe the most surprising thing he can do is tell us who really killed Andrea.

We have our theories about who really killed Andrea