Guillermo del Toro’s R-rated thriller “Nightmare Alley” is heading to streaming sooner than many expected. The film, which stars Bradley Cooper and Cate Blanchett, will be available to stream on both Hulu and HBO Max starting Feb. 1.

The streaming release comes less than two months after the Searchlight Pictures film was released exclusively in theaters, on Dec. 17.

Del Toro co-wrote and directed the dark psychological thriller, which revolves around a carnival worker who steals a mentalist act and becomes a member of high society, only to become entangled in a dangerous web after crossing paths with a psychiatrist named Lilith (played by Cate Blanchett).

The early streaming release is part of the existing agreement between Disney and WarnerMedia that was amended at the end of 2021. As part of that deal, Disney and WarnerMedia share co-exclusive rights to certain 20th Century Studios and Searchlight Pictures titles during their Pay 1 window (i.e. the first window of time in which a film can be licensed to play on a TV channel like HBO or Starz). Some of these titles are first exclusive on one streaming service before being added to another, like the 20th Century Studios release “The Last Duel” which is currently only streaming on HBO Max but which will be available on Hulu at a later date. Others, like “Nightmare Alley,” are shared which explains why it will be streaming on Hulu and HBO Max at the same time.

The PG-13 20th Century Studios release “Free Guy” is also being shared, as it will hit HBO Max and Disney+ on Feb. 23. Disney+ does not include R-rated titles, which is why “Nightmare Alley” is going to Disney-owned Hulu for its streaming release.

The film is del Toro’s first new movie since he won the Best Picture and Best Director Oscars for “The Shape of Water,” which was released in 2017. As “Nightmare Alley” aims for awards recognition, Searchlight Pictures recently released a black and white version of the film in select theaters that was painstakingly overseen by del Toro and cinematographer Dan Laustsen. 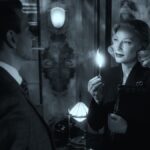