“Nina,” an infuriatingly amateurish picture about the great singer and pianist Nina Simone, is a new low for the musical biopic genre. First time writer-director Cynthia Mort, whose main experience is as a writer on the sitcoms “Roseanne” and “Will & Grace,” unforgivably exploits Simone’s memory and name with a movie that plays like a sketch comedy parody of the worst possible Nina Simone biopic. No one involved seems to have a clue who Simone was or what she stood for.

Mort has said that she could not get financing for “Nina” when she submitted the names of her preferred African-American actresses for the role of Simone. But then she was offered money if she would cast Zoe Saldana, who was thought to be a bankable enough name, and there was an outcry when it was reported that Saldana would be darkening her skin with make-up to play Simone, a development that pushed an already strained situation into the realm of the offensive and the grotesque.

Most of “Nina” is set in the 1990s, when Simone was in her sixties and her career was in eclipse due to her temperamental behavior, and so on top of everything else Saldana, who is in her thirties, looks much too young to be convincing as a diva in winter. Saldana does all of her own singing, and she uses no Simone-like vibrato but sometimes pushes her voice lower to try to sound like her.

She fails miserably on every single song, slaughtering most of the best numbers in Simone’s catalogue and even hitting off-key notes here and there. Saldana stares off into the distance when she sings and frowns and glowers in a clownish manner, trying to appear Serious and Significant in a way that just makes her look absurd.

Saldana gives a truly terrible performance in “Nina,” especially in the scenes where she is pitching fits and throwing champagne bottles at people, which play as if she were doing some “Mad TV” sketch about a crazy star in a turban. David Oyelowo, who plays Simone’s gay handler Clifton Henderson, also gives a bad performance where he does nearly nothing and just looks very depressed to be in this inane movie. 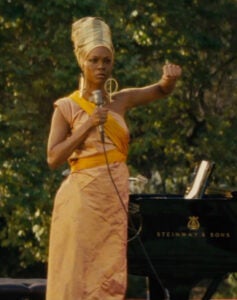 “Nina” begins with a brief scene where we see the young Simone insisting on having her parents up front as she plays a piano recital, and it does include a few brief and arbitrary glimpses of her 1960s prime, but most of the scatterbrained narrative revolves around her 1990s decline and interactions with Henderson. We see Simone take a random phone call from Richard Pryor (Mike Epps), and then a brief flashback to them playing a gig together, but this tells us nothing we need to know about either Simone or Pryor.

Scattered throughout are brief scenes from an interview Simone does with a French journalist, and these are notable only because Saldana suddenly decides to do some kind of accent in these interview segments. The really distressing thing about “Nina,” which features a light comedy-type musical score, is its cheerful, bouncy tone, as if a laugh track is indicated every time Simone loses her temper again. “Nina” tries to make Simone into a joke, but the only joke here is the movie itself.

Surely a decent budget could have been found to do a proper film about Simone for cable with an appropriate lead actress like Viola Davis, Angela Bassett, Alfre Woodard, or any number of other lavishly gifted African-American actresses who could have lip-synched to Simone’s own rippling voice and made us understand what made her so angry.

Until that movie comes along, “Nina” is an affront that should be shunned. If you are unfortunate enough to see “Nina,” you will need to spend a lot of time afterward listening to the real Simone on records and YouTube and anywhere else you can find a place where her intensely moving voice still lives. That voice will never be forgotten by anyone who cares about first-class musicianship.