“Nine Lives” is a badly made, mostly unfunny film, directed by Barry Sonnenfeld (“Men in Black”), a filmmaker not historically known for his participation in cheaply produced kids’ stuff like this. Ditto star Kevin Spacey.

Spacey plays Tom Brand, a Trump-like tycoon (fake tan on point, fascist leader aspirations non-existent) who is also a bad husband and father. His karmic reward for being too business-minded is to be transformed into a cat named Mister Fuzzypants, while Spacey in human form lies comatose in a hospital bed.

As a cat, he must not only save his business from corrupt corporate sharks but also win back his family’s love. His only hope in this seemingly impossible situation is securing the help of a supernatural pet shop owner and self-described “Cat Whisperer,” played by Christopher Walken.

Talking animals and body-switching story lines are commonplace in kids’ movies. Chihuahuas take over Beverly Hills, guinea pigs train as secret agents and Fridays turn freaky. Which is why, when Spacey’s character turns into a pissed-off cat, it’s not surprising. Equally unsurprising is the moral at play under the silliness. The list of family-oriented films centered on overworked, success-minded parents who are forced to re-learn the basics of human decency is a long one. They would appear to be a favorite of studio execs with parenting issues of their own.

More business as usual: because children’s expectations for a film such as this are centered around whether or not the talking animal can perform wild feats of slapstick comedy (it does, and sometimes amusingly, thanks to an endless amount of quick-and-dirty CG), the people who make the films can focus on staying under budget rather than creating something that makes sense. So in addition to listless direction from Sonnenfeld, and an overall feeling of cheapness and carelessness, “Nine Lives” also suffers from incoherence. 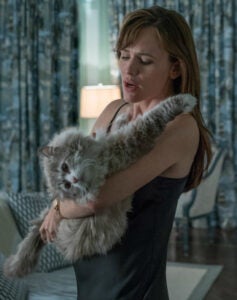 There are five names on the script (Matt Allen, Dan Antoniazzi, Gwyn Lurie, Ben Shiffrin, Caleb Wilson) and yet no solid answers as to how, exactly, a man’s essence is transferred to a long-haired feline, why the man’s family (Jennifer Garner, Malina Weissman) seems not unduly worried about the fate of their now-comatose husband/father, how his multi-billion-dollar empire is so easily subject to poaching and who has power of attorney over his affairs should he find himself simultaneously trapped in both a coma and a cat.

The surprise, then, is that “Nine Lives,” for all its formal badness, is also a fascinatingly odd film. It occupies a woozy gambling space somewhere between innocence and cynicism, never really laying its pocket change on either bet. Brightly colored production design is spiked with jokes about castration and alcoholism, marital infidelity and child labor. The near-death narrative cloud hovering over the movie never breaks open, its subject merely experiencing an extended naptime. Fear and grief and financial ruin, all waiting on the side, decide to take a nap of their own. When 2016’s preschoolers watch it again in 2036, they’ll marvel at the film’s darkness.

Walken, as the spooky cat daddy, steals what few scenes he’s given. He can do this in his sleep by now, making the most of odd pauses, weird glances and a knowing line delivery that allow audiences to see him taking a perverse delight in the occasional career humiliations of a life in movies.

Spacey, meanwhile, is pretty much just what the project ordered. An actor with reserves of rage waiting just under the skin, he is as threatening and sardonic a Mister Fuzzypants as ’70s TV celebrity Morris the Cat was in dozens of pet food commercials for a product that coincidentally shares the same name as this film. Which is to say that he is no threat at all. But the fact that Spacey can reduce the qualities that makes him terrifyingly murderous as “House of Cards” President Frank Underwood to family-film size is some sort of achievement, whether the target audience will appreciate that or not.

In a perfect entertainment landscape, this would be two films: the innocuously terrible addition to children’s cinema involving a cat getting carpet-urinatingly drunk on expensive Scotch, and its evil adult companion, a feature-length, R-rated gag reel that has to be already floating around a post-production office somewhere, one in which America’s angriest actor lets loose with profane observations on life as a digital kitty. When do we get to see that?

From ”Titanic“ to ”Mean Girls,“ everything is better with kittens

"Mean Cats": For Cady (pronounced "Kitty"), high school is about to get catty as she tangles with the resident popular clique.
View In Gallery