And the nominees are … “Nine,” “Red Cliff," "An Education," "District 9,” “The Stoning of Soraya M.” and lots of other films spread out across 22 different film categories.

But the Satellite Awards, which used to be called the Golden Satellite Awards and are presented by a 13-year-old organization of entertainment journalists called the International Press Academy, are a perplexing potpourri notable mostly because their nominations come so early in awards season.

The slate, which was announced on Sunday, includes six nominees for “Best Motion Picture (Drama)” and six more for “Best Motion Picture (Comedy or Musical)” – but somehow both “Inglourious Basterds” and “(500) Days of Summer” aren’t on either list, even though they did make the IPA’s “10 Best Films of 2009” list. And Neill Blomkamp secured one of only six best-director nominations even though his film, “District 9,” isn’t one of the 14 films that won best-picture nominations or made the 10 best list. 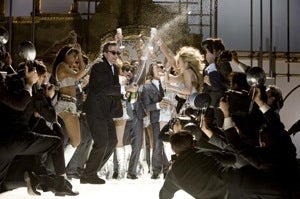 The dramatic films that did receive nominations were “Bright Star,” “An Education,” “The Hurt Locker,” “The Messenger,” “Precious” and “The Stoning of Soraya M.” On the comedy-or-musical side, the nominees are “The Informant,” “It’s Complicated,” “Julie & Julia,” “Nine” (left), “A Serious Man” and “Up in the Air.”

For best actor, which is also separated into drama and comedy-or-musical categories, the expected names (George Clooney, Jeff Bridges, Colin Firth, Jeremy Renner) are joined by the likes of Hugh Dancy for “Adam,” Johnny Depp for “Public Enemies” and Bradley Cooper for “The Hangover.”

“Nine” picked up the most total nominations, 10, plus a special award for best ensemble cast.  John Woo’s action film "Red Cliff" had seven nominations, though none in the best-picture, director or acting categories.  "An Education," "The Hurt Locker," Precious" and "Up in the Air" picked up five nominations each, while "Bright Star," "A Serious Man," "District 9," "Public Enemies," "It Might Get Loud" and "The Imaginarium of Dr. Parnassus" landed four.

Winners will be announced on December 20 in Century City.

Best Motion Picture (Drama)
“Bright Star”
“An Education”
“The Hurt Locker”
“The Messenger”
“Precious: Based on the Novel Push by Sapphire”
“The Stoning of Soraya M.”

Best Motion Picture (Comedy or Musical)
“The Informant!”
“It’s Complicated”
“Julie & Julia”
“Nine”
“A Serious Man”
“Up in the Air”

Best Motion Picture (Animated or Mixed Media)
“Cloudy with a Chance of Meatballs”
“Fantastic Mr. Fox”
“Harry Potter and the Half-Blood Prince”
“The Princess and the Frog”
“Up”
“Where the Wild Things Are”

Best Documentary Feature
“The Beaches of Agnes”
“The Cove”
“Every Little Step”
“It Might Get Loud”
“The September Issue”
“Valentino: The Last Emperor”

Best Sound (Mixing and Editing)
“It Might Get Loud”
“Nine”
“Red Cliff”
“Terminator Salvation”
“Transformers: Revenge of the Fallen”
“2012″