Charlie Sheen is not seeking a divorce, and he’s not negotiating with CBS – but he is talking to the law.

Sheen’s lawyers have been discussing a plea bargain in the actor's domestic violence case stemming from the Christmas Day incident between the actor and his wife Brooke Mueller, an individual close to the actor's camp told TheWrap. 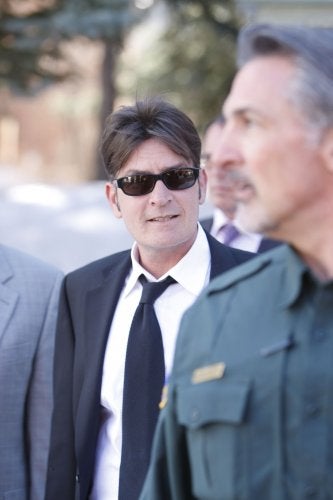 While offering no specifics as to what the deal could involve, the individual said, "This is what you do in cases that are about to go to trial, to reach a conclusion and save everyone a lot of money."

Arrested under his real name of Carlos Irwin Estevez, the actor was originally charged with menacing, a class five felony; criminal mischief, a class one misdemeanor; and second-degree assault, a class four felony.

In a court hearing in early February, the assault was reduced to third-degree charge.

On March 15, Sheen pleaded not guilty to all the charges. A trial — which could see the 44-year-old actor spending up to five years in jail if found guilty — has been scheduled to start July 21.

The same individual who said Sheen's legal team has put forth a plea deal added that "there have been no negotiations for the last three months" between CBS and Sheen, the star of the network's hit sitcom "Two and a Half Men."

After a short hiatus while Sheen entered rehab as a “precautionary measure,” the actor — who is reportedly paid $825,000 an episode — has continued working on the show as his legal troubles played themselves out in court.

As TheWrap reported in April, the actor has no deal or commitment with the network for the show beyond the recently completed seventh season.

And while admitting to “marital trials," the actor is committed to his marriage — at least according to a statement released Monday.

Charlie Sheen and Brooke Mueller "are not seeking a divorce nor has one been contemplated," the couple proclaimed in a statement released by their respective lawyers.

Citing "over-speculation" in the media, Sheen's attorney Mark Burg and Mueller's lawyer Yale Galanter claimed, on behalf of their clients, that stories of a split or of new financial agreements being negotiated between the parties are "false."

Neither Burg nor Galanter responded immediately to TheWrap's request for comment.

Rumors of infidelity and domestic strife have shadowed Sheen and Mueller in recent weeks, with a sometimes badly disguised and head-shaven actor seen leaving the home of model Angelina Tracy.

Both Sheen, who brought Tracy flowers, and the model claimed the visit was related to their mutual stint in rehab.

While unlikely to be thrilled with the attention that her husband, no stranger in the past to the allures of vice, has attracted, Mueller herself reportedly also has been seeking treatment.

The very public couple ended the statement with a plea "that their privacy be respected at this time."