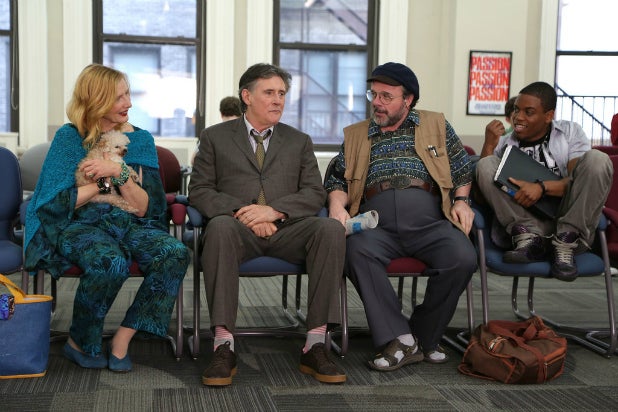 Ah, the actor’s life. For those who are smitten by the slings and arrows of mostly not outrageous fortune, the choice of a career is inescapable. It’s something they were born to do, something in their blood. Such a person is Lester Rosenthal (stage name Lawrence Rose), played with understated aplomb by Gabriel Byrne in “No Pay, Nudity.” (The unusual title refers to how a casting ad might read in a theater trade paper.)

Crisply written by TV producer Ethan Sandler (“New Girl”) and directed by theater veteran Lee Wilkof with an eye for small details and a lifetime of experience, the film is a loving, if slight, excursion into the world of New York theater, actors’ division.

To say Lester is a sad sack down on his luck is an understatement: After a lovely tracking shot into the teeming streets of New York, we follow his footsteps, still in his plaid pajamas, to the vet with his dying dog. After that, it’s on to his place of business, the Actor’s Equity lounge where Lester spends most of his days with a cast of characters that would do any sitcom proud.

Herschel (Nathan Lane) is the philosopher king, brought down by a rash act of violence on an opening night 22 years ago; Andrea (Frances Conroy), always packing her toy poodle, is the den mother with a sympathetic ear; and the dandyish Stephen (Boyd Gaines) is an actor on the rise. The room, wallpapered with show posters, is steeped in bits of theatrical lore: Herschel is likely named after Broadway legend Herschel Bernardi, and Andrea’s dog is named Papp. Hanging out with performers of this caliber for 90 minutes is a treat.

Lester is at a stage in his life where he doesn’t know what’s next for him. His obsession with his career at the expense of his family and all other aspects of his life has taken the joy out of both acting and living. He is consumed with the byproducts of an artist’s life: fear, insecurity, disappointment, and most of all, envy. When Stephen gets a part in a film that Lester had coveted, he takes no pleasure in his friend’s good fortune. He storms out of the celebration drunk and scowling.

In one of the film’s deeply felt moments, Herschel takes Lester aside for a good talking-to. “Stop counting other people’s blessings or you will never find any peace in this God-forsaken world,” he counsels him.

It’s not as if Lester is a bad guy, and Byrne’s performance gives him a full measure of humanity. Amidst the conflicting emotions, his face registers the kindness and compassion that probably had made him a good actor once upon a time. He’s been in a TV soap opera and on Broadway and had some highs, but now is definitely not one of them.

A spark of hope appears when he reluctantly fills in teaching an acting class for Stephen. He spots in the performance of his older student Pearl (Donna Murphy) the pure impulse that made him want to be an actor in the first place. They have a drink and hit it off but nothing happens, at least for now. Lester still has lessons to learn — or relearn.

Opportunity presents itself when he is given a chance to appear in a performance of “King Lear” in his hometown of Dayton, Ohio; not, however, in the titular role that he had read for, but as the Fool. It’s a part he played years ago, and Lester — afraid to face his past, onstage or off — is not eager to return to it, or to Dayton.

Wilkof does a good job staging a few scenes from “Lear” and manages to conjure up the feeling of the play, working with obviously limited resources, and overall in “No Pay, Nudity,” he creates a world where there are no villains, nor dark secrets to be revealed. These are just decent people, trying to do what they love.