Abdulrazak Gurnah, a Tanzanian writer who lives in the United Kingdom, won the Nobel Prize in Literature Thursday. His work focuses on imperialism.

The Swedish Academy said the award was given to Gurnah “for his uncompromising and compassionate penetration of the effects of colonialism and the fate of the refugee in the gulf between cultures and continents.” 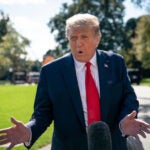 He has written 10 novels including “Paradise,” “By the Sea” and “Desertion.” He is the fifth African-born writer to be given the honor.

Beyond writing his novels, Gurnah recently retired as a professor of post-colonial literature at the University of Kent.

One Twitter user directed a tweet at the Swedish Academy Thursday, celebrating the win: “Guys I’m crying [Gurnah] taught me at university!!!! Someone with a name sounding like mine, writing the most incredibly astute books on the effects of colonialism. He had a profound impact on my reading and it was an honour to be taught by him.”