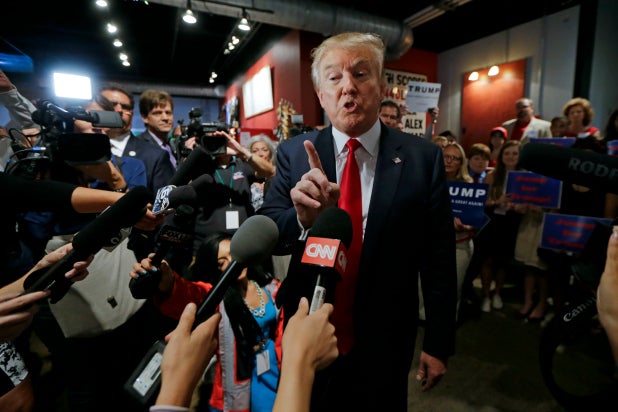 Brian Knappenberger’s urgent new documentary “Nobody Speak: Trials of the Free Press” is the sort of movie that impacts your viewpoint long after it ends. Granted, it’s aimed primarily towards the converted, which is to say, those already concerned about the potential erosion of the First Amendment. And its intentions are ultimately stronger than its execution. But you’re likely to pay a lot more attention to White House press briefings after watching it.

The original subtitle was “Hulk Hogan, Gawker and Trials of a Free Press,” and that sordid online saga remains the film’s primary focus. Unfortunately from a narrative standpoint, it offers virtually no one to root for.

In one corner, we have Nick Denton and his staff at Gawker Media, an online empire the late journalist David Carr once compared to “the mean girls who laid waste to everything they saw.” And in the other, we have wrestler Hulk Hogan, who sued Gawker for posting a clip of a secretly-recorded sex tape. The tape, should you not have had the privilege of viewing it yourself, featured him with the wife of his best friend, a Florida radio personality named Bubba the Love Sponge.

Watch Video: Hulk Hogan and Gawker Go to the Mattresses in 'Nobody Speak' Trailer

Meanwhile, things only get seamier when we learn that Silicon Valley billionaire Peter Thiel secretly bankrolled Hogan’s lawsuit in the hope of destroying Gawker. Why? Well, the fact that they turned his personal life into a matter of public discussion may have had something to do with it.

This is not, however, the most noble hill on which to stake a moral position, particularly since Knappenberger (“We are Legion,” “The Internet’s Own Boy”) finds a far superior one later in the movie. But he seems notably sympathetic to Gawker, overlooking the lowest moments in its controversial history while giving Denton and his former staff plenty of opportunity to make their case.

To viewers, though, Gawker’s righteous stance as anti-establishment renegades may be a harder sell. Denton, who oversaw the outing of private citizens and encouraged his employees to push well beyond snarkiness into personal cruelty, shrugs and says, “You know what? The world is mean sometimes. What do you want?”

Several of the film’s talking heads point out that none of this matters. “The reason to save Gawker is not because Gawker was worth saving,” lawyer Floyd Abrams argues, adding that “even the most disagreeable speech is as a general matter fully protected by the First Amendment.”

There’s no doubt that many observers will be chilled by the way Thiel used his money to destroy a website he had reason to despise. But Gawker was often, as Carr suggested, a bully itself, which undermines the film’s emotional attempts to push its David vs. Goliath setup.

Knappenberger offers a stronger hook in his next subjects, who are so compelling it’s a shame we don’t meet them sooner. In 2015, billionaire Sheldon Adelson bought Nevada’s biggest newspaper, shrouding an already-suspicious deal with the sort of secrecy that only galvanizes reporters. And the heroic staff of the Las Vegas Review-Journal are almost shockingly humble in their retelling of an incident that only gets worse with each revelation. They had sick children, families to support, and mortgages to pay, but they were dedicated to exposing irrefutably important news at any cost.

As it happens, Adelson and Thiel were both strong supporters of Donald Trump’s presidential campaign. So it seems right and natural that the film eventually segues into the Trump administration’s strikingly antagonistic approach to the press. But this segment, which could probably have been expanded into an entire film, feels frustratingly brief and oddly rushed.

It is, of course, easy to understand why Knappenberger devotes the most time to Gawker’s story. Sensationalism sells, and that’s never going to change. But it’s the dogged humility of the Las Vegas reporters — proud members of a profession Trump has called “the enemy of the American people” — that draws us into his essential thesis. They too get in the ring with a powerful foe, despite almost inevitable loss. And their willingness to risk it all, for the benefit of us all, feels downright patriotic.