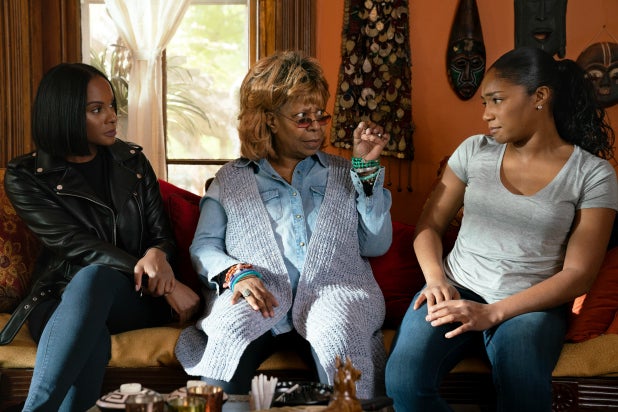 Tyler Perry loves to torture rich characters and female characters who put career over love and family, so just one look at the New York apartment of rising ad exec Danica (Tika Sumpter, “Southside With You”) in “Nobody’s Fool” makes it apparent that the writer-director has put two targets on her back.

Her high-rise two-bedroom has the kind of Manhattan square footage usually reserved exclusively for oil sheiks and media heiresses, and it’s furnished with the soullessness of a Wayfair.com commercial. It also boasts the phoniest skyscraper views this side of “Women on the Verge of a Nervous Breakdown,” although the latter film made them obviously fake on purpose.

I mention the apartment because it makes no sense, which makes it the perfect avatar for “Nobody’s Fool,” a comedy that, even by Tyler Perry’s notoriously lax standards, has very little internal logic or narrative drive. The movie is ostensibly the story of Danica learning to loosen up and love her own flaws, and those of other people, but it’s really a delivery device for Tiffany Haddish as Danica’s sister Tanya.

Watch Video: 'Nobody's Fool' Trailer: Tiffany Haddish Is Out of Prison and Ready to Kill the Guy Catfishing Her Sister

Where Danica is hard-working, focused and soft-spoken, Tanya is her exact opposite: she’s just gotten out of jail after five years, announces inappropriate opinions at full volume, and cuts through other people’s B.S. so they can stop kidding themselves and start living better lives. In short, she’s this movie’s Madea, and boy does it need one.

The plot involves Danica taking Tanya in post-release, and as Tanya gets back on her feet by working at a coffee house owned by nice-guy Frank (Omari Hardwick, “Power”), a budding relationship between Frank and Danica is stymied by her long-distance boyfriend and by the fact that Frank doesn’t fit all the items on Danica’s literal list of attributes she wants in a man; he has a child with another woman (we see this kid once before he disappears from the movie), is a recovering addict, and has been to jail, even though he’s obviously gotten his act together.

(Whoopi Goldberg, sporting a wig and an indoor marijuana farm that make her this movie’s Aunt Bam, pops up occasionally as Tanya and Danica’s mom in Jersey to dispense advice and toughlove.)

If a rumor started going around that Perry and his cast were just making up the movie as it went along, that would be a credible story. The plot galumphs around from idea to idea: the issue of whether or not Danica is being catfished by her long-distance man prompts the appearance of Nev and Max from MTV’s “Catfish” (MTV is the Viacom sibling of BET, and BET Films produced this movie), and Danica spends lots of time working on an ad campaign in scenes that indicate that Perry learned everything he knows about the world of business from the Hallmark Channel.

When most of Haddish’s scenes end with one of her co-stars breaking character and laughing, it’s clear that Perry just turned the cameras on and let his comedic leading lady go wild. And while Haddish is certainly gifted enough to run with this flimsy material, she would have benefited from someone at the helm paying attention. Poor Sumpter, saddled with this uptight character who exists to embarrass herself and to learn lessons, is game but overwhelmed, while Hardwick makes his character into one of Perry’s more interesting Flawless Rescue Studs. (The FRS is critic Witney Seibold’s male counterpart to Nathan Rabin’s legendary Manic Pixie Dream Girl trope.)

Perry puts some talented comic performers at the margins — Amber Riley, Missi Pyle, Jon Rudnitsky — but they’re mainly stuck either reacting to Haddish or sucking in the huge pockets of dead air in this movie’s comedic timing. It’s interesting to see Perry risk alienating his conservative fans by working in the R-rated sphere (between Haddish’s improvisations and those of a legendary comedian who turns up well into the film, there was probably no way to edit them to PG-13), but given that this is the auteur’s 20th theatrical feature film, there’s no longer any excuse for the pacing issues, the scenes that don’t end and the general flaccidness of his direction.

After Haddish’s star-making turn in “Girls Trip,” many of the internet’s more enthusiastic voices started saying, “Put her in everything!” Perhaps they should have been more specific.