Tom Ford‘s “Nocturnal Animals” opens not on the shining face of Amy Adams or the brooding stare of Jake Gyllenhaal — but with a striking collection of nude plus-size models, dancing full frontal for the camera.

A Hitchcockian orchestra plays over the sequence — before any of the starry cast is introduced — with no context for how it fits into Ford’s second directorial effort. It’s ultimately revealed to be a work of video art appearing in a ritzy L.A. art gallery run by Adams’ character.

The scene was as much a surprise to the onscreen performers as it will be to moviegoers. “Nobody would’ve thought that a 60-year-old, 300-pound grandmother would need a nudity rider in their contract,” Peggy Fields Richardson, one of the actresses selected by Ford, told TheWrap.

Richardson is one of four ladies to appear in the sequence, as well as a party scene featuring hundreds of extras — a gallery opening where the subjects lay naked on pedestals as a well-dressed crowd circles them, champagne glasses in hand. 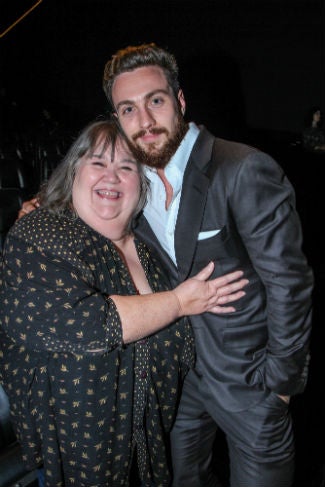 “Mr. Ford was empowered by us ladies,” said Piper Major, a nude model and actress who also shed her clothes for the scene. “There was no shame or anything like it involved. I didn’t ever once feel that I was being shamed or painted in an unattractive way.”

Richardson too said the atmosphere on set was incredibly supportive from the entire crew and even the extras. “He had a half-a-ton of naked women there,” Richardson joked. “But all of these boys were blowing kisses at me, flirting. I talked to everybody. We just had a good time.”

The sequence serves as a lens for Adams’ Susan Morrow, a perfectly presented but deeply unhappy gallerist and society type. But it marks a major departure for Ford, whose work as a fashion designer is renowned for sleekness, steely glamour and militant perfection.

“This is Tom Ford the director, this is not an advertisement to sell clothes,” the film’s costume designer Arianne Phillips said in a recent interview for TheWrap Magazine.

“The [opening] was almost satirical,” she said. “It was supposed to be Fellini-esque, something that could seem ridiculous to someone who was unaware of performance or conceptual art. But in the end, these incredible women wound up giving us something artful.”

The work itself is reminiscent of American artist Michael Haussman’s 2013 video series “Gravity,” which featured scantily clad plus-size human bodies jumping up and down in extreme slow motion. It also echoes a 2015 photo series from artist Substantia Jones.

In an interview for TheWrap Magazine, Ford called the opening sequence “a microcosm of one of the themes of the film. These are women who have literally let go of every single thing our culture says they should be, and they are joyful and happy.”

Ford added, “And then we cut to Susan, who’s trying so hard to be exactly what she thinks she should be, and she’s not happy.”

For what its worth, the script casts a cynical eye on the gallery installation. After Susan’s opening, she and her husband (Armie Hammer) attend a dinner party at the home of an art world dandy played by Michael Sheen. The host compliments Susan on her work, calling it expert commentary on “junk culture.”

“That’s what it is,” Adams says from beneath a spackle of pristine makeup and a fresh blowout, “junk.”

Distributor Focus Features is not handing out images or video of the sequence (probably a good tactic, given the movie topped the speciality box off this past weekend in its limited release debut).

Though he has run a powerhouse business of menswear, womenswear, accessories and beauty products for years, Ford has never occupied a space of body judgment and cruelty enjoyed by some of his peers — like Chanel designer Karl Lagerfeld.

“It was a comment on the art of the absurd,” Phillips said. “But when all the elements came together, it became something so different and beautiful. Those were really emotional days on set.”

On the final day of shooting the party scene, all four actresses got to spend time with Adams, whom they described as lovely and attentive.

“I did a closeup with Amy that was cut from the film, she was sitting on the edge of my pedestal,” Richardson said.

“She leaned over to me and said, ‘You’re the bravest woman in Hollywood,'” Richardson recalled. “I looked at her and said, ‘Well, I could never wear those shoes.'”