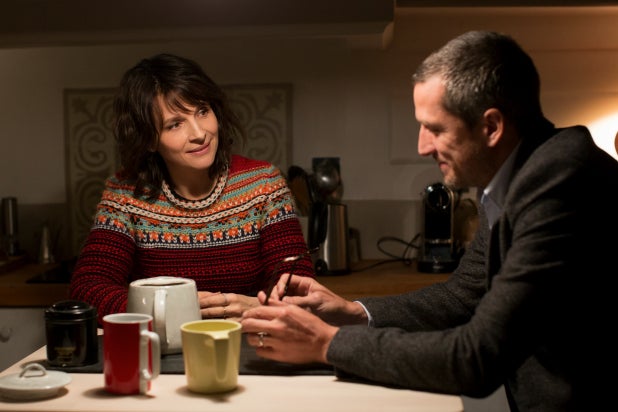 It’s difficult to ask hard questions about change and technology and progress — particularly to consider whether “progress” is actually progress or not — without sounding like a cranky old man, but writer-director Olivier Assayas has now done it twice. 2008’s “Summer Hours” contemplated a world in which new generations seemed uninterested in preserving art history and cultural treasures of the past, and now a decade later, with “Non-Fiction,” he asks similarly pointed questions about the future of books and literature in the internet age.

That he does so with a minimum of breast-beating and a surfeit of sparkling wit no doubt helps the message go down, particularly since it’s clear that he’s not offering answers but instead merely asking the questions.

The film introduces us to a group of friends, lovers and colleagues, all of whom engage in spirited conversations about the state of writing, acting and politics, areas that have been forever changed by online habits. Alain (Guillaume Canet, “Tell No One”) runs a venerable publishing house, trying to weigh the benefits and consequences of pivoting to digital. He’s having an affair with Laure (Christa Théret), the woman running that digital transformation, even though she has extreme ideas about what counts as literature (she equates tweets with haiku) and about the extinction of books and libraries.

Alain’s actress wife Selena (Juliette Binoche), spinning her wheels on a police drama, knows he’s cheating and rekindles a fling with author Léonard (Vincent Macaigne, “The Innocents”), whose latest manuscript Alain does not want to publish. Léonard is infamous for writing novels that are merely thinly-veiled accounts of his own life and love affairs — he insists it’s “auto-fiction” — and Selena lobbies for the publication of his book even though she inspired one of the characters. (It’s telling that Alain seemingly never notices this.)

“Non-Fiction” is Assayas’ talkiest film to date, but it’s also probably his funniest. (There’s a running gag about a movie-theater sex act and Michael Haneke’s “The White Ribbon” that keeps paying off brilliantly.) Assayas seems to be channeling the spirit of Éric Rohmer and his marathon dialogue-fests, but this is smart, insightful talk, delivered by an exemplary ensemble of performers (which also includes Nora Hamzawi as Léonard’s girlfriend, who works for an idealistic politician).

Assayas is undoubtedly snobby about popular culture — the bit we see of Selena’s cop show looks as dreadful as the superhero movie that Binoche goes to see in “Clouds of Sils Maria” — but he’s never overly precious about the topic at hand.

Books are, of course, wonderful things, but when Laure and other characters make a case for cheaper, more accessible e-books, the movie doesn’t necessarily disagree. “Non-Fiction” makes just as many barbs at the current state of the book industry, where authors sell books via controversy caused by writing barely-concealed roman à clefs about their real lovers and enemies.

Unlike Rohmer, who favored long takes and frequently locked down his camera, Assayas keeps these many conversations vibrant with the help of editor Simon Jacquet, who keeps each scene fluid without ever overplaying his hand, as well as cinematographer Yorick Le Saux (“A Bigger Splash”), who captures the warmth of the characters’ bourgeois surroundings but also clearly had a blast faking that cop show.

As with “Summer Hours,” “Non-Fiction” traffics in ideas and concerns without handing out leaflets; first and foremost, this is an empathetic and charming character piece, featuring top-notch actors (Binoche revels in a rare opportunity to be funny) enjoying richly clever dialogue. And if it encourages viewers to support their local indie bookstore afterward, then so much the better.