WARNING: Spoilers ahead for “Nope”

Jordan Peele had a twisted treat for those who saw his new film “Nope” this weekend: the intro to Ricky “Jupe” Park’s infamous sitcom “Gordy’s Home!”

In “Nope,” Steven Yeun plays Ricky as an adult, running the Santa Clarita amusement park, Jupiter’s Claim, in an effort to capitalize off his celebrity as a ’90s child star. At the peak of his fame, Ricky starred in “Gordy’s Home!” a sitcom about a chimp who lives with a family of humans. The show was a hit and got renewed for a second season but came to a horrifying end after a popped balloon startles one of the chimps playing Gordy during a birthday episode, causing it to savagely attack the cast, disfiguring Ricky’s co-star. 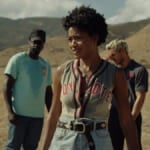 The grisly flashbacks to the on-set attack may not seem to be connected to the plot of “Nope” with its alien attacks around Jupiter’s Claim and the nearby horse ranch where OJ and Emerald Haywood (Daniel Kaluuya and Keke Palmer) try to get footage of the creature, but “Gordy’s Home!” and its demise are key to the film’s themes of how Hollywood and human society at large can degrade both humans and nature in its hunger for spectacle.

The sitcom intro even makes references to the harrowing flashback scene where a young Ricky hides under a table on the set to avoid the chimp’s feral rampage. The final shot of the intro with the boy fist-bumping Gordy would seem innocuous but ends up being a key memory for Ricky during the events of “Nope.”

“Nope” is now playing in theaters. 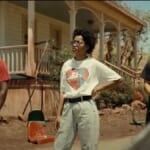